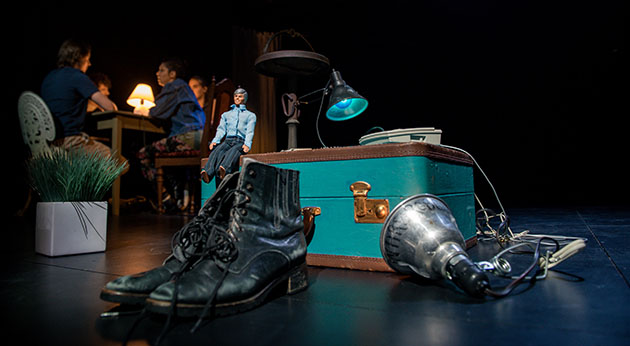 The University of the Fraser Valley’s Theatre department presents the second production of its 2018-19 season, Martin Crimp’s Attempts on Her Life. The show is directed by award-winning director and actor Alex Lazaridis Ferguson. Ferguson is the Co-Artistic Director of the internationally acclaimed performance group Fight With a Stick.

Through five distinct voices, Attempts on Her Life constructs a character named “Anne,” but the character remains unstable, ridiculously changeable, creating a fun game that quickly turns into more than just a game for the actors in the production. The stakes are high: if the actors can make Anne make sense, then maybe they can make sense of themselves in a rapidly changing world where self and place become cultural scripts created by multinational entertainment industries.

Quickly switching from shocking to hilarious in tone, Attempts on Her Life grapples with late 20th century obsessions. From pornography and ethnic violence, to terrorism and unprotected sex, its nameless characters attempt to invent the perfect story of who Anne really is.

Attempts runs March 12-23, 2019. Details about performance dates and times can be found at https://www.ufv.ca/plays/. Saturday matinees will be preceded by guest lectures by UFV faculty, which promise to enhance audience members’ understanding of the performance. Performances take place in Room D105 on UFV’s Abbotsford campus.

Reserve tickets early, as audience seating is limited. All performances are pay-what-you-can, with suggested prices of $15 for adults and $10 for students and seniors, cash only at the door. Seats can be reserved ahead of time by emailing theatre@ufv.ca or by phone at 604-795-2814.

UFV Theatre’s Fall production of Rocks: A Play of Northern Ontario was well received. The season concludes in April 2019 with the Devised Theatre Showcase in which the students in UFV Theatre’s devised theatre class present original, collaboratively created theatre projects, applying everything they have learned in the course. The final performances of the Devised Theatre Showcase [April 24 -25] will be included in UFV’s second annual Interpret Festival [April 26], a year-end celebration of the work of students in all creative and fine arts programs. Check ufv.ca/plays for more information about upcoming performance.

Take a deep dive into UFV events and activities with Valley Fest
At 105 (dog) years, Mac the canine counsellor at UFV is retiring