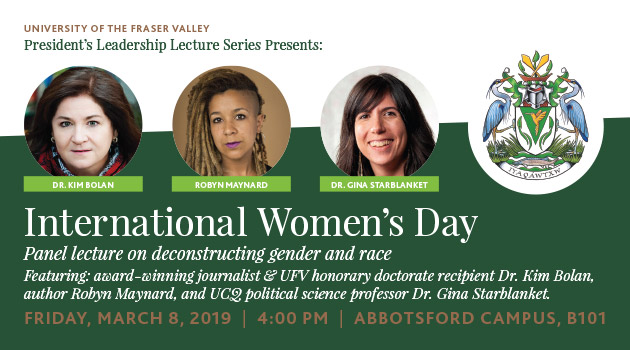 There will be some high-achieving women on hand at the University of the Fraser Valley on March 8 for International Women’s Day.

This President’s Leadership Lecture Series event will take feature a panel format, with the united theme of Deconstructing Gender and Race. The event starts at 4 pm in the UFV Abbotsford campus lecture theatre. The public is welcome and admission is free.

A student political science display on gender issues and refreshments will precede the lecture just outside of the lecture hall from 2-4 pm.

This will be Kim Bolan’s return visit to UFV, after receiving an honorary doctorate at the 2018 Convocation ceremonies. Fearless, compassionate, and wildly determined, Bolan is commonly counted among Canada’s top journalists. Her body of work is unparalleled, from covering arguably the biggest crime story in Canadian history to reporting on a gangster’s plan to kill her at home.

A newspaper veteran of 34 years, Bolan has written for the Vancouver Sun for the past three decades after getting her start at a community newspaper. She burst onto the national news scene while covering the 1985 bombing of Air India Flight 182. Her coverage garnered aggression from many connected to the case, leading to death threats and bullets fired at her house.

She joined the Political Science department at the University of Calgary as an assistant professor in Indigenous Politics in 2018, with a research and teaching focus on the politics of decolonization in Canada. In her dissertation, Beyond Rights and Wrongs: Towards a Treaty-Based Practice of Relationality, Dr. Starblanket examined the contemporary politics of treaty implementation in Canada with a focus on the numbered treaties. Currently, her work centres on Indigenous political theory and takes up questions of treaty implementation, gender, feminism, identity, decolonization, resurgence, and relationality.

Award-winning author Robyn Maynard is a Toronto-based writer and the author of Policing Black Lives: State Violence in Canada from Slavery to the Present. She’s been a part of grassroots movements against racial profiling, police violence, detention and deportation for over a decade.

Maynard’s writing on race, gender, and discrimination is taught widely in universities across Canada and the United States.  Her expertise is regularly sought in local, national and international media outlets and she has spoken before Parliamentary subcommittees, the Human Rights Committee of the Senate, and the United Nations Working Group of Experts on People of African Descent.

Maynard has a long history of involvement in community activism and advocacy. She been a part of grassroots movements against racial profiling, police violence, detention and deportation for over a decade and has an extensive work history in harm reduction-based  service provision serving sex workers, drug users, incarcerated women and marginalized youth in Montreal.  She is currently working toward the completion of a new book manuscript.