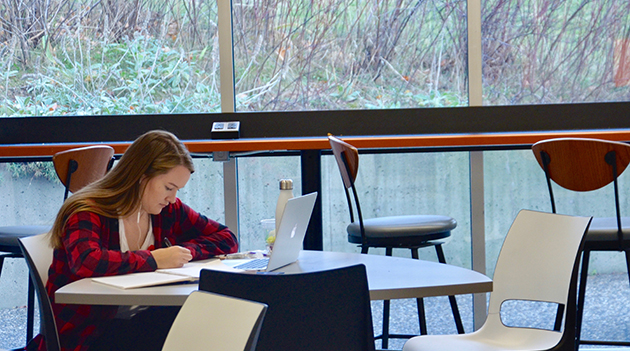 Emma Rose (seen here studying in the UFV cafeteria) was one of five students to receive Ike Barber transfer scholarships. She transferred to UBC to pursue an engineering degree.

Five former UFV students who have transferred to continue their education have received Ike Barber Transfer Scholarships worth $5,000 each to assist them in moving between BC post-secondary institutions.

Caleb Keillor of Abbotsford (who transferred to Simon Fraser University), and Jake Letkeman and Garrett Offereins (both of Abbotsford), Emma Rose of Chilliwack, and Brent Mueller of Langley (all of whom transferred to the University of British Columbia), received the scholarship. All five transferred in order to enrol in engineering programs after taking an initial one or two years of engineering studies at UFV.

“We are proud of these recipients and happy to have provided them with a solid start to their post-secondary education,” said Alisa Webb, Vice President, Students and Enrollment Management. “We know they will represent UFV well as they continue to excel in their studies.”

The scholarships are awarded annually by the Irving K Barber BC Scholarship Society to undergraduate students who have completed at least one year at a public post-secondary institution in BC and are transferring to another degree-granting institution to complete their studies.

Scholarship funds come from the returns on a $15-million endowment established by the province in 2006. The fund is named after philanthropist Irving K Barber, who had a long history of supporting public education and research projects in British Columbia before his death in 2012.

“Supporting students who transfer between post-secondary institutions makes their pathway to success more affordable,” said Melanie Mark, Minister of Advanced Education, Skills and Training. “As someone who benefitted by starting off in college and graduating from university, I know the value of transferring credits. Students save time and money to reach their goals! Congratulations to this year’s recipients.”

To qualify for a transfer scholarship, students must have strong grades and demonstrated volunteer service to their school and/or community.

The Society’s programs are administered by the Victoria Foundation. To find out more about this Scholarship or other Society programs, call 844-478-4645 (toll-free) or visit www.ikbbc.ca