Sitting among a village of gum-dropped, mostly European-style gingerbread houses, an austere cookie structure stands out, more distinct than its flashy candy counterparts.

The tiny home is an artistic interpretation of a traditional Coast Salish dwelling, similar to abodes that were built for thousands of years along the banks of the Fraser River and its tributaries.

This modern depiction sits in the Vancouver Hyatt Regency, where it claimed first prize in the professional category of Gingerbread Lane, an annual Christmas competition between eager foodies.

An input of ideas, collaboration, and labour were instrumental to the winning gingerbread house’s creation.

But one notable ingredient — or tool, actually — stands out in the recipe.

Joel Feenstra, an assistant professor of electronics at the University of the Fraser Valley, explains that the acquisition of a laser engraver by the UFV Faculty of Applied and Technical Studies sparked the idea of a gingerbread house years ago.

“I’ve been experimenting on all sorts of materials from stone to wood to antlers to plastic to bone to leather — pretty much everything.” Feenstra says. “And one of the things I’ve always wanted to do was create a gingerbread house with this because we can cut phenomenally tight cuts.”

He was sure that with his hands-on background and his new piece of equipment any structure would be possible, and very sound.

Feenstra didn’t have to walk far to find his second team member, Sian Hurley, a professional cook and instructor in the university’s Culinary Arts program.

Hurley’s durable gingerbread recipe came to the project well-tested. In a previous job she made 250 gingerbread cookies every Christmas.

“It took me three years to figure this out where it tasted good and was still structurally sound,” Hurley says. “It’s neat to see it come together in a house.”

The secret to great gingerbread: her personal spice mix and a dough that’s been aged for at least a few weeks (six years of practice with the recipe doesn’t hurt).

With materials and tools ready to go, Feenstra and Hurley still needed a design.

Feenstra was pointed to well-known local artist CarrieLynn Victor, who was excited about the concept, and the group started working on the plan.

“I’ve never worked with gingerbread or lasers before so the limitations were in what the laser could reproduce from a digitally drawn image,” Victor says of the process. “I had a lot of fun going back and forth with Joel figuring out what we needed to do, how to interpret the design so that it could be read by the laser.”

She holds up a precisely carved out gingerbread tree. “And then of course seeing them in real life makes it so real, it’s so cool.”

The resulting design is Victor’s artistic interpretation of what she knows about the houses structurally with a touch of creative flair, adding windows on the sides.

Victor adds that the carved house posts of a man in a hat holding a paddle are an important feature of her Coast Salish design.

Details weren’t only in the engravings though.

Mt. Cheam appears in the backdrop, modeled from a photo taken of the peak from Rosedale, east of Chilliwack.

The layout was meticulously thought out as well, with the house facing the water and a Google Earth image referenced for accuracy of the inlet’s shape and contour.

Feenstra created a 3D moulded wood base, with orange flickering LEDs to emulate a fire inside the gingerbread house.

“We really wanted to make sure that this project showed that this is a home that has existed here and that this is who Chilliwack is,” Feenstra says. “To reflect that in the mountains that surround it, in the shape of the inlet . . . where CarrieLynn’s village was traditionally from. And that CarrieLynn did all the design.”

In her write up that accompanied the final product at Gingerbread Lane, Victor echoes the sense of teamwork that drove the project and the purpose behind her design.

The CarrieLynn Victor and University of the Fraser Valley Faculty of Applied and Technical Studies gingerbread house collaborative project can be seen along with many other edible creations at the Hyatt Regency Vancouver, 655 Burrard Street. Gingerbread Lane is free and open until Dec. 28 with donations going to support the Make-A-Wish Foundation. 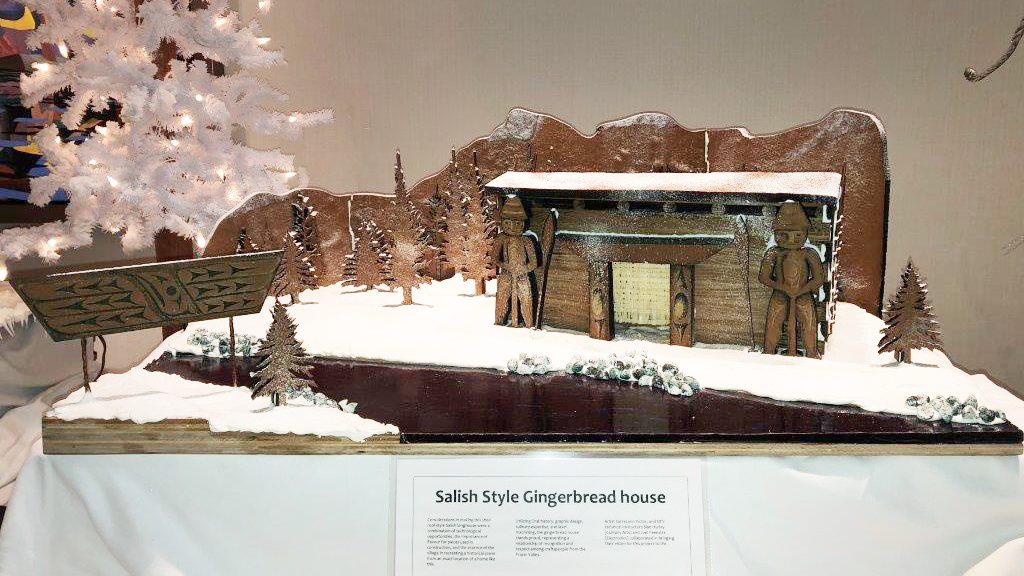 Legal Administrative Assistants who love their jobs
Give the United Way