UFV breathed new energy into its vehicle fleet last week, with a new electric transport addition to the multi-campus operation.

The university’s facilities management team replaced an old shipping van with a UFV-branded 2015 Nissan Leaf S that provides a clean alternative during the frequent trips to and from the regional campuses.

“The purchase of this electric vehicle is making a statement that UFV is taking sustainability and a green revolution seriously and we’re moving forward with that,” said Blair McFarlane, UFV’s energy manager.

“You can feel good about driving an EV because it’s zero emissions,” he added. “When you’re pulling power from B.C.’s electrical grid it’s 98 per cent carbon emission free. So when you compare that to your traditional vehicle that’s burning fossil fuels, it’s a no-brainer on the social side. You’re making an impact, you’re doing your part.”

And the vehicle acquisition checked off a number of other boxes for the university, according to McFarlane.
Facilities is saving on all of the gasoline that would have gone into a replacement carbon-burning vehicle, as well as the oil changes, and the maintenance that comes with internal combustion engines.

The retired shipping van was a big offender on the fuel cost expense sheet, contributing 28.8 per cent of those fees within the fleet.

“You’ll find in your typical vehicle it’s $70 a tank for fill-up, whereas the equivalent kilometres traveled in an electric vehicle cost about five dollars,” McFarlane said. “There’s the financial incentive to make the switch to an EV. It pays itself back quite rapidly.”

He did the math and it was clear­: with an annual cost savings of almost $5,500 the Leaf would pay for itself in 4.6 years.
There are also potential educational opportunities for trades students to learn about electric vehicles and maintaining them. 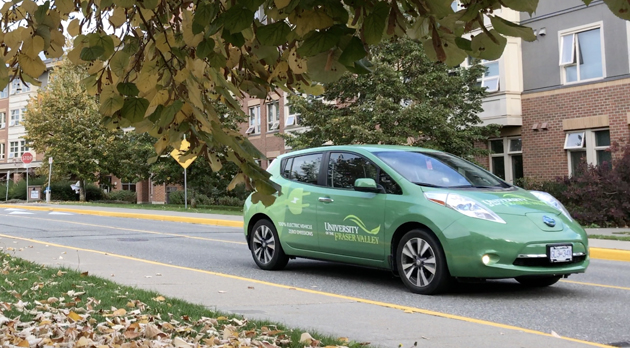 “We’re very proud of making that transition and being a leader in the community throughout the Fraser Valley in doing so,” McFarlane said.

Part of that leading role is providing more EV charging stations around the  campuses to provide options and support for those who drive electric vehicles and also entice people to get behind the wheels of EVs and become owners and operators.

This year Facilities worked with Ancillary Services to install two Level 2 charging stations: one each at the Chilliwack and Abbotsford campuses.

While this new EV is operated through the Facilities department and predominantly used by janitorial, building maintenance, and mechanical maintenance  staff to shuttle themselves and their materials between different campuses, McFarlane forecasts a variety of UFV electric cars.

“Moving forward I think we can expect to embrace the EV revolution and see a few more electric vehicles in varying departments and homes for them on different campuses,” he said. “It speaks to the vision and the values that UFV holds with environmentally responsible development in the Fraser Valley.”

Stormy weather and lost love at UFV Theatre this November
UFV to mark 60th anniversary of Dr. Zhivago with forum