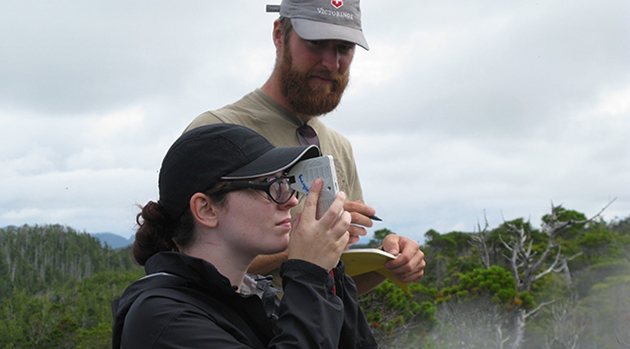 UFV Geography and Environment BSc students Jordan Bryce (foreground) and Travis Gingerich survey the topography of the landscape on Calvert Island (BC central coast), in summer 2015, in preparation for sampling of bedrock outcrops for surface exposure dating.

Was there a prehistoric superhighway used by ancient peoples to migrate south from North-east Russia to the Americas? And if so, where was it?

Research involving UFV earth scientist Olav Lian and his students in a region centred on B.C.’s Calvert Island suggests that the central coast of BC was ice-free by about 17,700 years ago, earlier than previously thought. The estimated timing of retreat of the western margin of the ice sheet means ancient people may have used a coastal route to migrate south into the Americas. Some higher locations were exposed even earlier. This is important, because it suggests an early route along the western coastline of Canada might have been viable well before an alternative, inland route.

Which route was used — and when — remains a highly contentious topic amongst archaeologists and geologists.

Lian and his students worked with British (University of Manchester), Canadian (University of Northern BC), and American (Tulane and Purdue universities) colleagues to conduct surface exposure dating, a technique that can be used to determine how long quartz-bearing rock has been exposed to high-energy particles from space. 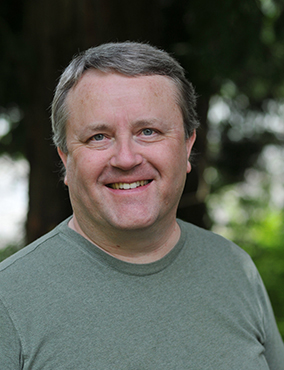 The findings should help archaeologists target regions for investigations tracing the migration pathways of early people into the Americas.

“We show that the western margin of the ice sheet retreated earlier than previously thought,” notes the summary prepared by the researchers. “Other margins of the ice sheet advanced later, creating a complex picture through time. The early retreat of the western ice margin exposed numerous islands that could have been used by early people migrating southward.”

Lian had been working on Calvert Island through his association with the Hakai Institute, which is based there, for several years previous to this study. He introduced his colleagues to the site, and suggested locations on the mountaintops from which to take samples.

The samples were then processed in a surface exposure dating laboratory at Tulane University in Louisiana.

“The area around Calvert Island on the British Columbia west coast, where we conducted this research, is important because archeologists recently found ancient footprints there that formed about 13,000 years ago, younger than the time we are estimating that the ice receded,” says Lian. 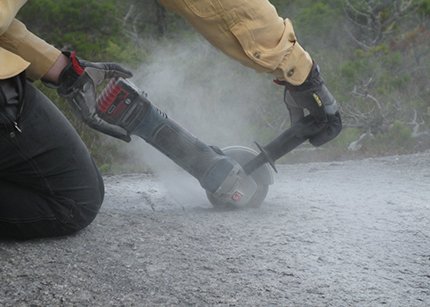 Bedrock samples being cut from an outcrop for exposure dating using an angle grinder.

“This area of the coast seems to have been very important to the early peoples of these regions. It would have had year-round access to food sources. The change to sea level was minimal in this region, compared to other areas during the ice age. It might have been a good place to live and wait out the crazy adjustment of the landscape that followed the ice age.”

Reflecting UFV’s commitment to involving undergraduate students in research, several were involved in this project, including Travis Gingerich, who worked with Lian on Calvert Island during the summers of 2015 and 2017. Gingerich graduated from UFV this year, and is now pursuing his master’s degree and continuing his research at Simon Fraser University.

“It was an awesome and amazing experience to get so much exposure to field and lab research at the undergraduate level,” notes Gingerich. “It encouraged me to continue in this area of study.”

The team’s findings were recently published in a paper entitled Retreat of the western Cordilleran Ice Sheet margin during the last deglaciation in the journal Geophysical Research Letters, a prominent journal of the American Geophysical Union that rapidly publishes research on major advances in the earth and atmospheric sciences. Its target readership include the scientific community and the general public.

One Response to Central BC coast may have been a viable migration route to Americas, new research shows