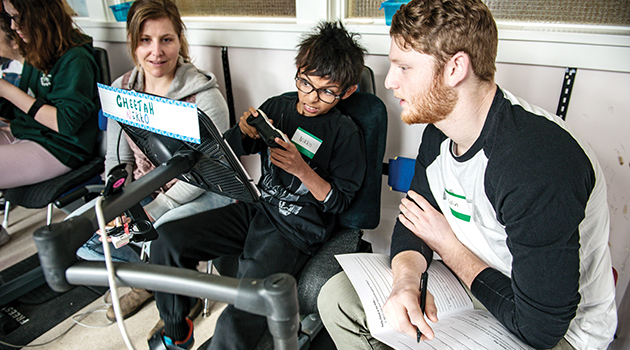 But it’s more than that.

It’s physical activity, because the children have to pedal exercise bikes vigorously in order to make their avatars work in the video game.

It’s research, because professors and students from two universities are observing and collecting data.

And it’s experiential education, because students from the University of the Fraser Valley are serving as “buddies” for the children, and two upper-level students are organizing and coordinating the program.

It’s Exergames. And it is “awesome on so many levels” according to professor Alison Pritchard Orr, who heads the research project along with fellow professor Kathy Keiver, both faculty members in Kinesiology at UFV.

The enthusiastic shouts come from an 11-year-old who, like all the kids in the program, has a cognitive disability. Some of the children have a Fetal Alcohol Spectrum Disorder (FASD). The symptoms can manifest in many ways, including delayed physical growth and poor impulse control.
Sometimes this boy is the happiest guy in the room, letting everyone know he LOVES Exergames. Sometimes he’s swearing a blue streak because he’s frustrated at how things are going. He looks younger than his 11 years.

His big buddy, UFV student Colin Maxwell, calms him down and refocuses him on the activity, offering encouraging words. 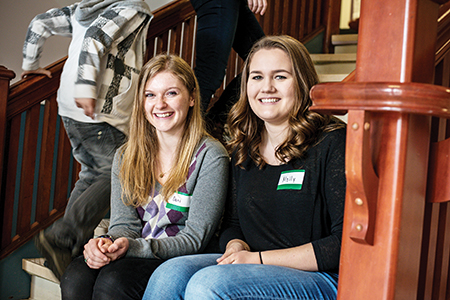 Hovering in the background and observing are  Dani Summers and Molly Rose,  the two senior UFV students who are coordinators of the Exergames program.

They’ve been working since September 2017 on planning for the practical needs of this research project, and are responsible for its day-to-day operations.

For Summers and Rose, this is a part-time job, funded by a grant received from the Kids Brain Health Network, a national network of researchers and health professionals helping children with neuro-developmental disabilities.

But it’s also a bridge from classroom studies to the world of applied research and career-related work, one that helps build a skill set that will benefit them professionally after graduation from UFV. (Both completed their Bachelor of Kinesiology degree in June 2018. Summers is accepted into a one-year teacher education program, and Rose will be starting her Master of Occupational Therapy at UBC).

“It’s an amazing experience to be so involved working with children with exceptionalities,” says Summers,

“I have learned a lot about project coordination too.”

“As one of the coordinators, it has been a great educational opportunity to be a part of the process from the beginning, taking it through UFV’s research ethics review, recruiting student volunteers, training them, and learning about how the video-game bikes work,” she added.

Rose and two other upper-level Kinesiology students are also conducting their own research projects connected to the Exergames program as part of a directed studies course. She has used data collected in this study to investigate the relationship between balance and visuospatial processing in children with FASD. Mia Harries carried out a comparative study on working memory and sleep quality in children with FASD. And Erin Hryhoriw researched motor skill deficits in children with FASD and the ways in which assessments are performed and analyzed.

Other Kinesiology students are getting their first experience volunteering one-on-one with children with disabilities by serving as the buddies who sit with the Central students and guide them through the Exergames.

UFV’s Kinesiology department has been involved in research on the impact of exercise on the brains of children with cognitive disabilities for over a decade. 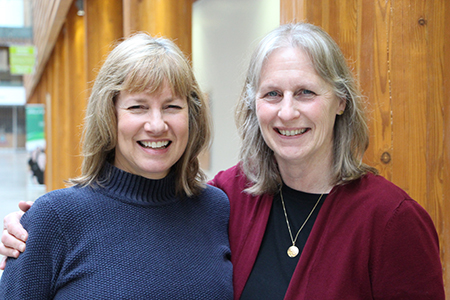 For professors Pritchard Orr and Keiver, it’s an opportunity to network with other partners as part of a large national study, enhancing UFV’s reputation in the area of applied community focused research.

“We are the principal investigators for the FASD portion of this study, and one of the things we bring to the table is community access based on years of building trusting relationships with our partner school.”

“I speak to this research all the time in my adaptive physical activity class,” says Pritchard Orr. “And working with our students in this setting allows us to get to know them better and enhances our ability to relate to them on a more personal level.”

They’re also contributing to the body of knowledge about children with cognitive disabilities such as FASD.

Now the UFV researchers have teamed up with Queen’s University researchers to see if having children play video games powered by exercise bikes enhances cognitive function.

UFV students conducted pre-testing on their young research subjects and a control group before the games portion of the program began, and they will do post-testing to measure any changes in May. 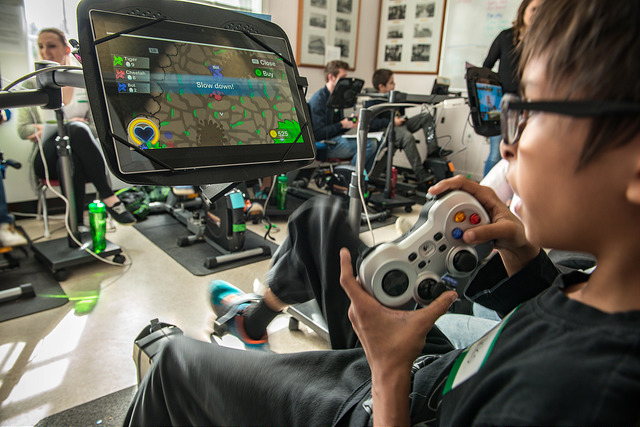 “We’re particularly interested in seeing whether exercise and activity enhances the executive function of the brain, activities such as planning and problem-solving, and other higher-order skills,” notes Keiver.

Meanwhile, their Queen’s University partners are investigating whether exergaming enhances social skills and the sense of connection to others.

Neven Golubovich, a computer programmer from Queen’s, observes the students playing the games, consulting via phone with his colleague back in the Kingston, Ontario lab. They continually adjust the game so it’s neither too difficult nor too easy for the young players. They will be comparing the experience of this particular research population with children in other settings with other types
of disabilities.

The students acting as buddies during the Exergames sessions gain valuable experience working one-on-one with children with cognitive disabilities. It also helps them apply what they’ve been learning in class to a real-life setting.

“A project like this brings together so much of what are students are learning in class: it includes physical activity, psychology, research methods, fitness testing, and more,” says Keiver.

“It really introduces them to the field of working with people with disabilities, and I’ve had many students come back to say that their volunteering in our earlier similar programs were one of reasons they got accepted into graduate studies, teacher training, or professional school,” adds Pritchard Orr.

Benefits for Central Community School and the study participants

The children in the study benefit from one-on-one interaction with their UFV student buddies, and enhanced opportunities for physical activity and social involvement with their co-participants.

The school welcomes the chance to work with UFV on the program. 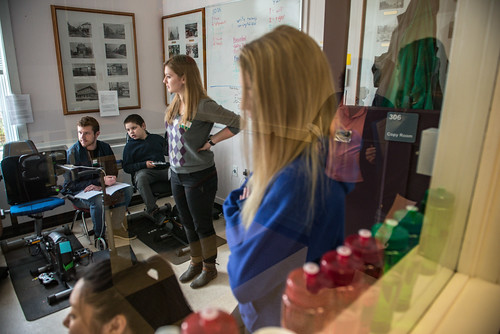 This story originally appeared in the Spring 2018 print edition of UFV’s Skookum magazine.