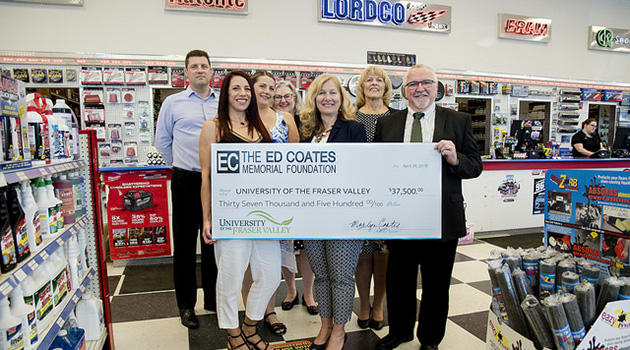 The Ed Coates Memorial Foundation (ECMF) presented a $37,500 donation to UFV. In attendance for ECMF were Marlyn Coates, Sarah Durant, Ian Coates, and Candace Gottschalk. Receiving the donation on behalf of UFV were Rolf Arnold, Sherri Magson, and Sheila Reimer.

Ed Coates founded Lordco Auto Parts in 1974 with a small store in Maple Ridge, BC. Over the years his entrepreneurial spirit and aggressive drive to succeed established Lordco as BC’s market leader in the sale of automotive parts and accessories. Now the foundation established in his memory is helping future automotive professionals and entrepreneurs to launch their own successful careers in the industry he loved.

The contribution to fund the UFV awards is the largest gift made by the Ed Coates Memorial Foundation to date. The foundation donated $37,500 to establish the endowments, and this amount was matched by UFV.

Coates was a community-minded entrepreneur who believed in giving back, in his hometown of Maple Ridge as well as in other communities throughout B.C., where Lordco operates over 100 locations.  Community involvement was always foremost on Ed’s mind, with numerous initiatives launched over the years to support community events and foster the development of youth entering the industry.

The Ed Coates Memorial Foundation was formed by his wife and children after Ed’s sudden passing in 2014. Their goal was to create a bold, innovative foundation that reflected his dedication to the community, the automotive industry, and the spirit of entrepreneurship.

“In funding these awards, we hope that Ed’s entrepreneurial legacy will live on in the businesses that are founded by individuals who have benefitted from the foundation’s support,” said Candace Gottschalk, Ed’s daughter and VP of Human Resources for Lordco. “Ed was an innovative business leader and born entrepreneur who guided his company through difficult economic times and firmly established Lordco as a leader in the automotive industry.”

UFV appreciates the investment in its students.

“We very much appreciate this investment in the future of our automotive students by a foundation that honours Ed Coates, an admired leader in the industry in BC,” said Rolf Arnold, Associate Dean of Applied and Technical Studies at UFV.

Support for the Ed Coates Memorial Foundation comes from a number of fundraising initiatives by Lordco as well as community events. The well-regarded reputation of Lordco in the automotive aftermarket community has aided in building support for the foundation.

About UFV
Located in the beautiful Fraser Valley just east of Vancouver, British Columbia, Canada, the University of the Fraser Valley (UFV) is a fully accredited, public university that enrolls approximately 15,000 students per year. UFV has campuses and locations in Abbotsford, Chilliwack, Mission, Hope and Agassiz, and a growing presence in Chandigarh, India.