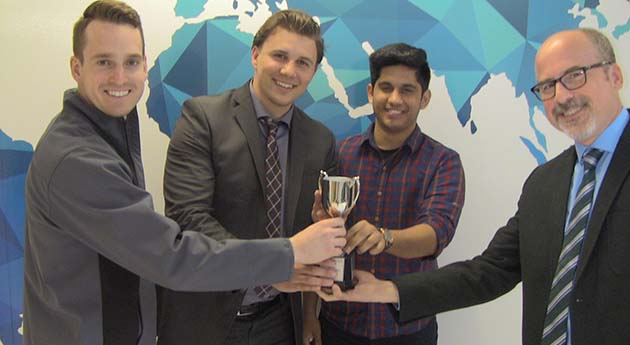 Does the prospect of making cold calls send fear into your heart? For many people it does. But for professional salespeople, a willingness and ability to make successful cold calls is a sign of high functioning communications skills. And courage!

For the past five years during the month of March, students in UFV’s Bus 322 Advanced Selling course have participated in a hands-on sales campaign for the Abbotsford Chamber of Commerce that requires them to carry out a variety of prospecting methods, including cold calling.

Working in small teams, the students contact business owners and managers in Abbotsford and invite them to attend a group sales presentation that the student teams put on at the Sevenoaks Mall boardroom. After the presentations, the business representatives are invited to sign up for a Chamber membership. The student team that sells the most memberships during the month of March earns a special prize:  their names on the Top Performer’s Cup — and the bragging rights (and appropriate course grade) that go along with coming first in the competition.

Since the sales competition first started in 2014, Bus 322 students have sold more than $20,000 in memberships in the Abbotsford Chamber. This year’s class sold 25 memberships, which brought in a total of $6,753 in revenue to the Chamber, a 37% increase over the 2017 campaign.

The hands-on sales campaign carried out for the Abbotsford Chamber in Bus 322 Advanced Selling is an example of the applied education provided in UFV’s BBA degree.  Bus 322 is one of three courses in the BBA focused on professional selling. Together the three courses make up what is known as the sales track within the Marketing major.  According to Bus 322 instructor Mark Breedveld, UFV is the only public university in British Columbia to provide such depth in sales education, and it is one of the distinguishing features of the UFV BBA program.