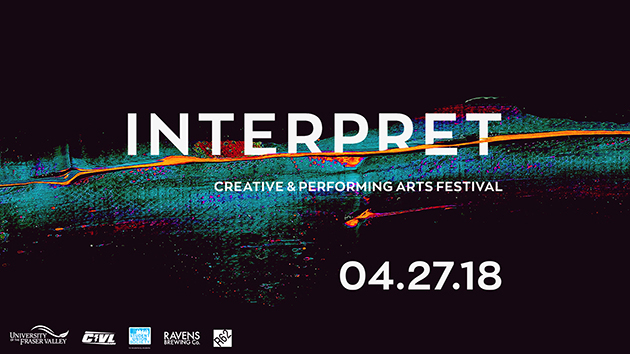 Culture will be on the menu at UFV on April 27 when Interpret, the inaugural Creative and Performing Arts Festival, launches.

The move to Abbotsford by the Theatre department has inspired the Visual Arts, Theatre, and Creative Writing students in the English department to host, for the first time, a festival celebrating the creative and performing arts here at the University of the Fraser Valley.

The planning stages began last November 2017 when Theatre and Visual Arts got together to discuss what this event would look like. The close proximity of the three areas allows for an integrated process encompassing the different disciplines. The participants include 18 senior students as well as an alumni: VA (7), Theatre (7), and Creative Writing (6).

This event would replace the annual BFA Grad Show and for Theatre, it would add interdisciplinary site-specific performances to student directing showcases. It would also introduce to the Fraser Valley community the multi-faceted culture of the arts at this institution.

With assistance from faculty and staff, this student-driven event has the support of VASA, TSA and the Creative Writing Club. The event is sponsored by SUS, UFV, CIVL Radio, Restaurant 62, and Ravens Brewery Company.

“We believe this festival will be a significant opportunity to celebrate the caliber of talent in the creative and performing arts at UFV and connect with the community,” says Grace Tsururamu.

This event will celebrate the arts at UFV featuring Theatre, Creative Writing and Visual Arts. The following individuals, including alumni, will showcase their diverse talents on Fri, April 27:

Event locations include the S’eliyemetaxwtexw Art Gallery (B136), D and C buildings.

Event is free and everyone is welcome!