Part two of the Indigenous Film Screenings at the University of the Fraser Valley will feature a tribute to the traditional territory and vibrant and dynamic culture of the Sto:lo people. This series will feature a selection of films about Sto:lo culture and history. Special guests will include Sto:lo filmmaker Theresa Point-Warbus.

The Lynching of Louie Sam and Kidnapped Sto:lo Boys depict some of the devastating impacts of colonialism, and the power of film to shed light on “forgotten” aspects of our history. Hands of History, a classic NFB film by Loretta Todd, weaves together the stories of 4 Indigenous women artists, including Sto:lo master weaver Rena Point-Bolton. Iyomex Temexw Líte Sto:lo: Beautiful Land of the Sto:lo uses the language of film to depict the the traditional unceded territory of the Sto:lo peoples. The Roundhouse, by Sto:lo filmmaker Theresa Point-Warbus, tells a story that is both modern and reflective of the traditional oral history of the Coast Salish people.

This event is presented by Indigenous Affairs and the Office of the Vice Provost, with support from the Teaching and Learning Centre.

The 2018 UFV Indigenous Film Series will conclude on April 4 with My Legacy and special guest, the award winning Tsilhqot’in film maker Helen Haig-Brown. The film is a deeply personal documentary which follows her journey as she attempts to heal her own relationship with her mother. The film weaves together art, music, and storytelling and exposes the intergenerational impacts of the residential school on our most intimate relationships. Haig-Brown will also screen a selection of her short films.

In February 1884, a lynch mob of 100 American men crossed the US border into British Columbia and forcibly removed a 14-year-old Aboriginal boy from the custody of a Canadian constable, rode south a few miles and hanged him from a cedar tree. For the Stó:lo First Nation, this tragedy is a defining moment in their history. This film tells of the only documented case of a cross-border lynching in Canadian history. The NFB classic, Hands of History,

Based on historical research by Keith Thor Carlson and commissioned by Sto:lo Nation, The Lynching of Louie Sam examines the ongoing struggle of First Nations communities to have the wrongs of the past examined in a meaningful way.

“Sto:lo is the Halq’eméylem word for river. It is also the name of the Coast Salish people whose traditional territory stretches from Yale to the mouth of the Fraser River. The Fraser River has always been an important source of food and a major transportation route for the Sto:lo. The Elders tell us that the Sto:lo have lived here since the beginning of time. Sto:lo culture and traditions continue to flourish today as it did in the past.”

From traditional to contemporary, these exceptional artists reveal their philosophies as artists, their techniques and creative styles, and the exaltation they feel when they create. A moving testimony to the role that Indigenous women artists have played in maintaining the voice of their culture.

Liya is conflicted about her identity; it just seems so simple for everyone else. When she hears about a party, the pressure really sets in. The night takes an unexpected turn when she’s reminded of the value of her roots. 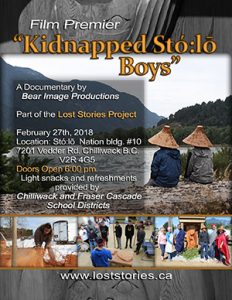 This film is a collaborative narrative, the main focus being a tribute to Sto:lo boys that were kidnapped by gold miners during the time of the Fraser Canyon gold rush. California had passed laws saying that miners could steal Indigenous boys and use them as labour. It is unclear how many boys were taken; some were abandoned along the way and many died or never returned.

In 2017, master carver Terry Horne carved a red-cedar Coast Salish memorial pole in honour of the missing boys, with the participation of students from the Chilliwack School District. The memorial pole is now located at the Telte-yet Campsite near Hope, BC.

Kidnapped Sto:lo Boys was created as part of The Lost Stories Project; see http://loststories.ca/ for other films that explore little known stories about the Canadian past.