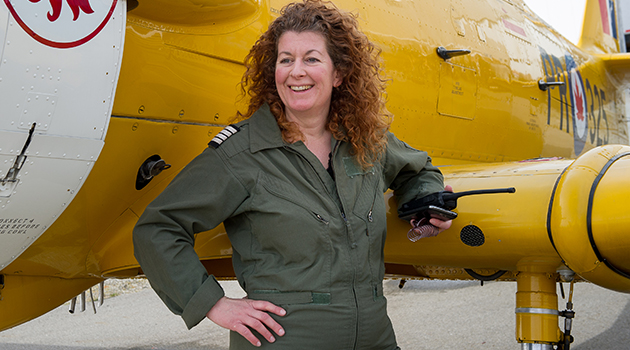 Kirsten Brazier didn’t let the fact that few women become pilots stop her from building a successful career in the aviation industry, and she brings that “do anything” attitude to her current passion: encouraging girls and women to achieve in high-tech fields.

Founder of both Achieve Anything Foundation and The Sky’s No Limit — Girls Fly Too!, Dr. Brazier will speak on overcoming adversity as part of the UFV President’s Leadership Lecture Series on Wed, Jan 31 at 4:30 pm.

UFV President Jackie Hogan is pleased to welcome Brazier, who received an honorary doctorate from UFV in 2017, back as a guest speaker. Brazier will speak in the Student Union Building on the Abbotsford campus. Admission is free and the public is welcome.

Brazier’s speech topic is Why Success is Spelled with an “F” — and how your success can help effect world peace.

The “F” in her speech is for failure, something she experienced plenty of before finding her niche in aviation.

“I’ll be sharing my story of how I went from high-school drop-out to airline transport-rated pilot, honorary doctorate recipient, and founder of the world’s largest gender diversity initiative to inspire female future leaders in STEM-based fields such as aviation, aerospace, marine & defence,” Brazier says.

She wants to ensure all women have the opportunity to pursue the career of their choice and maximize their potential.

“One of my professors once told that me you spend 80 percent of your life invested in your career, so you better pick something you enjoy doing if you want to enjoy your life,” she notes.

She took his advice and became a licensed airplane and helicopter pilot, and attained more than 25 years of experience, including flight operations, business management, aviation consulting, mentoring, and outreach. In addition to flying all over Canada (and beyond) she has flown for several charter air service companies, as well as been a business partner in her own start-up airline and maintenance company. For most of her career she has been one of the few women in an industry dominated by men.

She set out to change that through The Sky’s No Limit — Girls Fly Too! This annual event employs a unique hands-on approach to inspire the missing female demographic in aviation, aerospace, the marine industry, and the defence sector.  Since 2012 more than 45,300 participants have been introduced to new career possibilities and 7,217 females of all ages have experienced the magic of first flight.

Now, as president and founder of the federally incorporated Achieve Anything Foundation, Brazier is working to develop and implement year-round projects and programs of lasting value geared to inspiring future female leaders in STEM (science, technology, engineering and math), and related fields.

“I want this movement to grow until it is no longer needed. My current role is not just a job but an opportunity to improve female participation in the industry by alerting them to what’s out there. We can’t expect them to imagine a career that they have had no contact with. We need to get them flying, holding tools in their hand, and engaging with real-live role models.”