VP External Craig Toews invites the community to buy a paddle as a way of joining the new Ripple Makers donor support club.

You could feel the love in UFV’s Student Union Building on November 15, as the university thanked donors for all the support they provide to UFV, and for the ripple effect that their help has on students and the wider community.

Supporters from all over the Fraser Valley and beyond gathered in Abbotsford for the third annual Town & Gown fundraising dinner.

At the end of the night, more than $85,000 had been raised for student scholarships, awards, and bursaries at UFV, bringing the total of funds raised in 2017 that were directly connected to the Town & Gown event to just over $200,000.

UFV President Jackie Hogan referred to the university’s new coat of arms at the event, noting that it includes the phrase Iyaqawtxw, which means house of transformation in Halq’emeylem (the language of the Sto:lo people).

“UFV truly is a house of transformation,” she noted. “Our students do amazing things, and continue to do so when they go out in the world as alumni. But they need a helping hand from donors and supporters like you. Thanks for your support!” Dr. Malwinder Dhami, one of UFV’s biggest supporters, was quick to buy a paddle.

UFV’s Advancement office announced a new way to support the university at the event: the UFV Ripple Makers monthly giving club. For a monthly donation of $43 (UFV’s age in 2017), members get admission to Town & Gown each year along with other special event and networking opportunities. Dozens joined the club at Town & Gown, and many pledged $100 on the spot for a commemorative Ripple Makers canoe paddle.

Dr. Malwinder Dhami of Abbotsford was recognized as a founding Ripple Maker because of his many donations over two decades, his influence encouraging others to support UFV, and his ongoing commitment. His latest gift will fund a leadership award for a student transferring from UFV’s campus in Chandigarh, India, to continue studies at UFV in Canada.

UFV professor emeritus Darryl Plecas, current Speaker of the BC Legislative Assembly, pledged $12,500 for a new award at the event, and is also a founding member of the Ripple Maker club. Former Alumni Association Chair Nik Venema (BBA ’12) and his wife Marnie (BA ’15) showed their support for UFV, and jokingly noted that they were proving that millennials can join their elders in donating to a good cause, by announcing that they are funding two new student award endowments with a donation of $12,500.

Emily Henry of Chilliwack, who earned a Substance Abuse Counselling certificate in 2005, was named Distinguished Alumni for 2017 in recognition of her work with Indigenous offenders in the federal correctional service.

Alexis Warmerdam of Abbotsford, who completed the Engineering Transfer program, returned to her agricultural roots after university. She received the Young Distinguished Alumni award for her role in developing Abbotsford’s agritourism industry through Bloom, the Abbotsford Tulip Festival and Abby Roadside, a Harvest Social. UFV science student Roshan Gosal was the student speaker at Town & Gown. He thanked supporters for allowing scholarship recipients like himself the time and resources to focus on their studies and volunteerism. Gosal volunteers coaching Special Olympics athletes, and leads the End The Word campaign to discourage the use of derogatory remarks about people with developmental disabilities.

UFV kinesiology student Kiya Posthumus shared her story through a video documenting her long-journey back from a debilitating injury that ended her track and field career and plans for an athletic scholarship to an American university. She’s now planning a career in the health field and happy that fate brought her to UFV and the many connections she’s made by studying in her home community.

Platinum sponsors were MNP and West X/Xerox. Gold+ sponsor was The Cooperators.

Special thanks to Save on Foods. Media sponsors were Abbotsford News, Chilliwack Progress, and Patrika.

Check out the photo slide show: 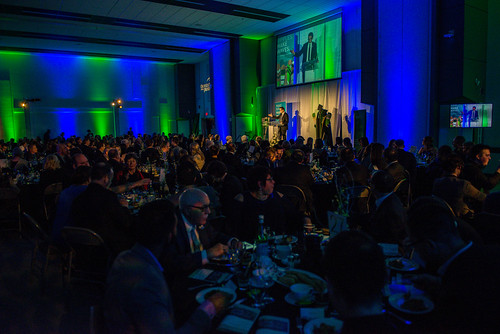