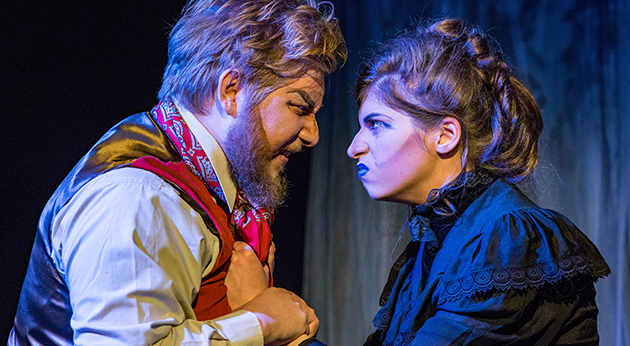 Chris Taylor as Smirnov (aka The Bear) Victoria Dufficy as Popova in Chekov’s The Bear.

UFV Theatre kick offs its 2017-18 “In Transit” Season of Theatre in the newly renovated studio on UFV’s Abbotsford campus with a farce. The season opens with a darkly hilarious production of Anton Chekhov’s The Bear. With only 30 seats available in the intimate performance space, audience members will experience The Bear up close and personal.

This half-hour performance, directed by upper-level student Noel Funk, takes the audience on a journey from grief and anger to unlikely love. Young widow Popova, after seven months of mourning her late husband’s death, receives an unexpected visit from the arrogant Smirnov, who has come to collect an outstanding debt. The encounter quickly devolves into heated arguments resulting in broken furniture and an all-out duel. This refreshingly fast-paced one-act play is a farcical comment on human nature, sudden change, and strong emotions. This bitingly satirical, bite-sized performance is the perfect way to experience the department’s newly renovated black-box studio. 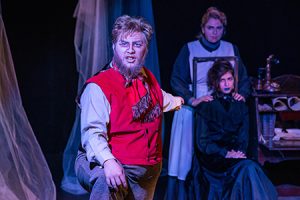 Chris Taylor as Smirnov (aka The Bear), Victoria Dufficy as Popova, Mhairi McKay as Luka.

The Bear runs Nov. 22–Dec. 1, with matinees at 11:30 am and early evening performances at 4:30 pm. Performance dates and times can be found at www.ufv.ca/plays. All performances of The Bear are “pay-what-you-can” and cash only. Seats can be reserved ahead of time by emailing theatre@ufv.ca or by phone at 604 795-2814. Performances will take place in D105.

UFV Theatre’s 2017-18 “In Transit” season celebrates the department’s move to newly renovated facilities at the university’s Abbotsford campus. This season offers a diverse selection of original, classic, and contemporary plays, featuring characters in the midst of transitions.

After the season’s opening with The Bear, the department will present Intimacy. Arising from the curiosity of one inspired student, Intimacy will “bare it all” February 7–9. This original performance, written and directed by upper-year student Des Hale, presents authentic stories and conversations exploring the relationship between intimacy, orientation, sexuality, and identity.

Next, UFV Theatre will stage Problem Child, a dark comedy by renowned Canadian playwright George F. Walker, from March 7–17. In this comedy, Walker straddles the line between humour, desperation, and anger to depict a “fiercely struggling family in a dysfunctional world.”

The season will conclude in April 2018 with public performances of final projects from the 2017–18 Directing class. Watch the department website and social media this spring for more details about these edgy, experimental, and environmental student works.