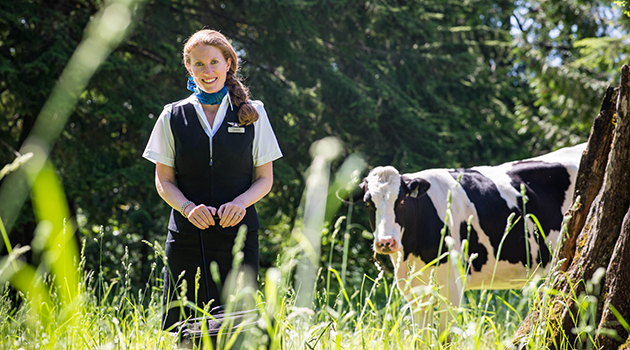 For almost eight years, Jacqlyn Marvin’s future was literally up in the air.

Steering her interests toward UFV Agriculture changed that in a hurry.

A successful flight attendant based out of Seattle’s Sea-Tac International Airport, Marvin travelled the world, but couldn’t shake a nagging tug to her roots high atop Chilliwack’s eastern hillsides — where she first fell in love with animals on her family’s 80-acre farm.

As a girl, the self-proclaimed ‘die-hard’ dove into every aspect of the local 4-H club, embracing its motto of ‘Learn to do by doing’. From geese to goats she studied and presented on every breed. On long bus rides to Abbotsford Christian School she’d dream of becoming either a veterinarian or flight attendant. Years later at 35,000 feet, Marvin realized there was no denying a call to cattle.

“Sometimes in life you need to experience the things you think you want before embracing your true passions,” she says.

“And even then I was hesitant to do the school thing.”

But the die-hard dove in again — excelling in her studies to earn the 2017 Lieutenant Governor’s medal as top student in a certificate program at UFV.

Homework was written while her pilot fiancé drove south along Interstate 5. Essays were edited in airport terminals. Case studies were hashed out in strange cities after landing late at night.

“I’ve learned nothing is really too much,” she says.

“There never seemed to be enough hours in a day. It was exhausting, but I’ve learned not to underestimate myself.”

Marvin says all of her instructors played important roles in her success, but two in particular stood out.

“She definitely has passion for her interests.”

“Thanks to Annette and her encouragement I may actually consider enrolling in a U.S. university for an agriculture degree down the road. I would never have thought about that without her kind words.”

Focusing on sustainability over organic approaches, Marvin is working towards environmentally responsible farming. She and her fiancé Justin recently purchased and moved onto a 5.5 acre farm in southern Oregon, where they’ll put her education to work by raising cattle.

“People are more interested than ever in knowing where their food comes from. They’re becoming more educated, which leads to an understanding of the importance of local products. They’d rather buy from a farmer they can look in the eye.” she says.

“Growing up my world pretty much revolved around animals. This just feels right.”

Marvin receives her award Tuesday, June 6 during the 9:30 am UFV convocation ceremony at Abbotsford Centre.