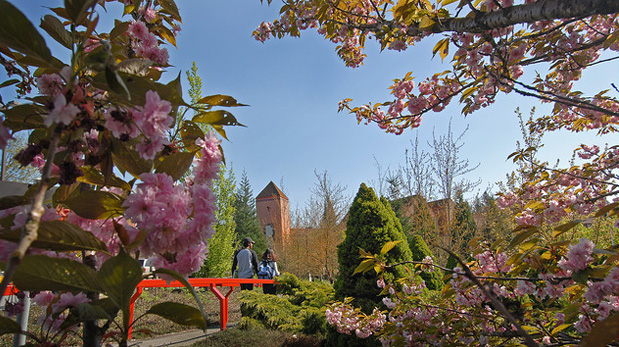 For the past few months, a small group of organizers have been working to organize Abbotsford’s first Jane’s Walk event. These walks are designed to connect community members with one another in discussions of place meaning and history. This event runs Friday through Sunday, May 5-7. These and the other Jane’s Walks are free and many are family (and dog) friendly.

UFV faculty and students are leading some of these walks, including:
Saturday at 11.30: Food and Culture walk of downtown Abbotsford. Kicks off with bubble tea! Led by Sarah Speight, Geography Honours student
Saturday at Noon: UFV’s Wild Side — explore the campus’s plant life and communities in a walk lead by biology prof Alan Reid and physical geography and biology major Donovan Toews.
Saturday at 2pm: Dr. Mark Evered will lead a walk of UFV and tell stories of his time, not only as president, but as grandfather-in-charge! A great family-friendly event as Dr. Evered will be sharing the great child-friendly spaces on campus that he and his grandchildren like to explore.

Please consider turning out for one or more of these great walks or for one of the other great walks organized as part of the Jane’s Walk series. More information on all the walks can be found at: http://janeswalk.org/canada/abbotsford/

Thanks for coming out!

What is a Jane’s Walk?

Jane’s Walks are free, locally organized walking tours, in which people get together to explore, talk about and celebrate their neighbourhoods. Where more traditional tours are a bit like walking lectures, a Jane’s Walk is more of a walking conversation. Leaders share their knowledge, but also encourage discussion and participation among the walkers.

A Jane’s Walk can focus on almost any aspect of a neighbourhood, and on almost any topic you can think of.Walks can be serious or funny, informative or exploratory; they can look at the history of a place, or at what’s happening there right now.  Anyone can lead a walk — because everyone is an expert on the place where they live!

Jane Jacobs (1916-2006) was an urbanist and activist whose writings championed a fresh, community-based approach to city building. She had no formal training as a planner, and yet her 1961 treatise, The Death and Life of Great American Cities, introduced ground-breaking ideas about how cities function, evolve and fail that now seem like common sense to generations of architects, planners, politicians and activists.

Jacobs saw cities as ecosystems that had their own logic and dynamism which would change over time according to how they were used. With a keen eye for detail, she wrote eloquently about sidewalks, parks, retail design and self-organization. She promoted higher density in cities, short blocks, local economies and mixed uses. Jacobs helped derail the car-centred approach to urban planning in both New York and Toronto, invigorating neighbourhood activism by helping stop the expansion of expressways and roads. She lived in Greenwich Village for decades, then moved to Toronto in 1968 where she continued her work and writing on urbanism, economies and social issues until her death in April 2006.

A firm believer in the importance of local residents having input on how their neighbourhoods develop, Jacobs encouraged people to familiarize themselves with the places where they live, work and play with words like these:

Under the clock tower, main entrance

Join UFV Biologist Alan Reid and UFV Geography student Donovan Toews as they lead a walk through UFV’s gardens, wetlands, and forests. Discover more about the native and non-native species that are incorporated into this campus landscape, and the functions they play in the larger ecosystem. Learn about what the strategies are being used to improve ecosystem health, and about some of the research that UFV faculty and students have been conducting on the natural spaces of the UFV campus.

A Grandfather’s (and President’s) Exploration of UFV

For the past 8 years, most people have known Dr. Mark Evered best in his role as UFV’s President and Vice-Chancellor. But for his grandchildren, he and his wife Maureen have one of the “best back yards ever”, namely the campus of the university. Mark can show you were the berries grow best, where the UFV turtle lives, and where some of the most exciting, most tranquil and prettiest places are on the Abbotsford site. Take a walk with Dr. Evered and share his knowledge of place from his time as university president and as grandfather/explorer-in-charge.