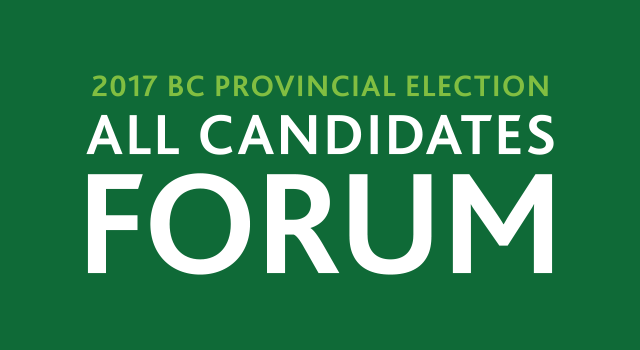 UFV students will have the chance to ask questions of provincial election candidates at two All Candidates debates on Mon, April 24, and Tues, April 25.

The public is welcome to attend these debates, to be held in the lecture theatre (B101) on the Abbotsford campus, from 7 to 8:30 pm, with an informal reception to follow afterwards in the cafeteria.

The first debate will run Monday, April 24, and will focus on the Abbotsford-West riding. Liberal candidate and incumbent Mike de Jong debate NDP candidate Preet Rai. Green Party candidate Kevin Eastwood has also been invited but had not confirmed at press time.

The second debate will run Tuesday, April 25, and feature the Abbotsford-South riding. Liberal candidate and incumbent Darryl Plecas will debate Green Party candidate Aird Flavelle. NDP candidate Jasleen Arora has been invited but had not confirmed at press time.

The debates are organized by the UFV Political Science Student Association.

“We believe it is important for the university to encourage both students and the community to engage in politics. Hosting the all candidates debates on campus is a way that we, as the Fraser Valley’s academic institution, can foster political involvement and engage the student body and our community in the democratic process,” says PSSA president Olivia Friesen.