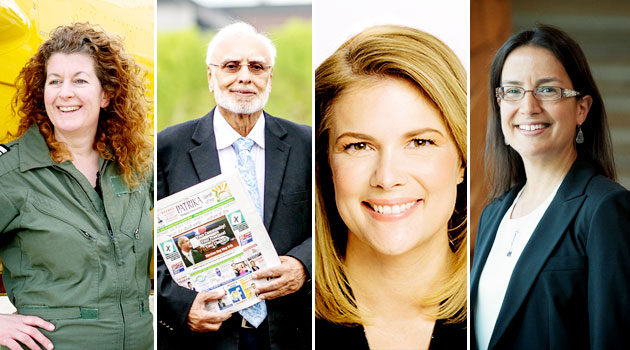 Four exemplary citizens will receive honorary doctorates at the University of the Fraser Valley Convocation ceremonies, to be held June 6 and 7 at the Abbotsford Centre.

They include Kirsten Brazier, an aviation professional and mentor of young women in science and technology; Dr. Nadine Caron, Canada’s first female indigenous surgeon and an advocate for northern, remote, and Aboriginal communities; Andy Sidhu, the founder and publisher of The Patrika, Abbotsford’s English-Punjabi bilingual newspaper; and Tamara Taggart, co-anchor of CTV Vancouver’s News at Six and advocate for people with disabilities.

“I am extremely impressed with the achievements and inspirational stories of the four individuals receiving our highest honour,” said UFV President Mark Evered. “They each exemplify the values of excellence and service to community that we hold dear at UFV.”

Kirsten Brazier
Kirsten Brazier is president of the Achieve Anything Foundation, based in Langley. She formed the organization to develop and implement projects and programs aimed at inspiring female leaders in STEM (science, technology, engineering, and math), and STEM-based fields such as aviation, aerospace, and the marine and defence sectors. Brazier is the founder of the extremely popular annual The Sky’s No Limit — Girls Fly Too! event, which has provided more than 20,000 young women with an introduction to aviation through a free introductory flight. Brazier is an aviation professional with 24 years’ experience as a pilot (airplanes and helicopters). She also has excelled in aviation operations and management, aviation consulting, mentoring, and community outreach.

Brazier will receive her doctorate at the 9:30 am ceremony on June 6.

Nadine Caron
Dr. Nadine Caron is Canada’s first female indigenous general surgeon. She is internationally renowned for her advocacy work addressing the disparities of rural, remote, northern, and Aboriginal communities. Reaching extraordinary success since her university days as a star student and basketball player, Caron was the first female First Nations student to graduate from UBC’s School of Medicine (as the top student) and was named one of Maclean’s 100 Canadians to Watch. While completing her surgical residency, she achieved her Master of Public Health at Harvard. Today she continues to distinguish herself as an outstanding surgeon, researcher, mentor, educator, patient advocate, and community leader. She is a faculty member in the Northern Medicine program at the University of Northern BC, an associate faculty member at John Hopkins Centre for American Indian Health, and an assistant professor with UBC’s Faculty of Medicine. Through role-modeling and public speaking, she encourages First Nations youth to share her love of learning and further their education.

Caron will receive her doctorate at the 2:30 pm ceremony on June 7.

Andy Sidhu
When Andy Sidhu emigrated from Malaysia to Canada in 1974, and started working at a dairy farm, he didn’t imagine a future in publishing. He joined the Canada Farm Labour Pool as a bookkeeper, utilizing his accounting background, and was promoted to management roles. His ability to speak fluent English and Punjabi made him well-known in the community, and he soon became an interpreter and cultural relations advisor for various organizations, including the local police department, UFV, and Canadian Immigration Services. In 1996 he founded and became publisher of The Patrika, Abbotsford’s only bilingual newspaper (English-Punjabi). Through his newspaper and his volunteer service, he has built bridges and has become a multi-award–winning champion of multiculturalism.

Sidhu will receive his doctorate at the 2:30 pm ceremony on June 6.

Tamara Taggart
Well known as the co-anchor of CTV News at Six, Tamara Taggart is a veteran broadcaster, third-generation Vancouverite, cancer survivor, and mother of three who has been with CTV Vancouver in various roles since 1997. Recognized for her commitment to the community beyond her work in broadcasting, Taggart was appointed to the Order of British Columbia in 2015 for her volunteer work supporting health care and the well-being of children and people with disabilities. Among the numerous organizations she is involved with, Taggart is a strong supporter of the Developmental Disabilities Association and the BC Centre for Ability. Her son Beckett has Down Syndrome, and Taggart’s TEDx Talk has helped reframe the conversation with parents of special needs children. She is the recipient of many broadcasting awards.

Taggart will receive her doctorate at the 9:30 am ceremony on June 7.