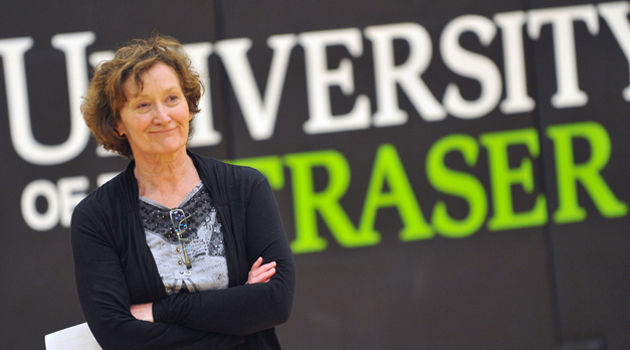 The first time Diane Griffiths ventured into a classroom at Fraser Valley College, she was sure that she didn’t belong there.

It was an English class with the late Art Ross in the old Abbotsford Marshall Road campus in the 1970s, and once she was brave enough to cross the threshold and sit down, it gave her a positive taste of what post-secondary could be like.

“I had left home when I was 17. I’d always wanted to go to university, but it’s really tough when you’re on your own and dealing with the expenses of daily living.”

After living in BC’s Cariboo region with her husband Barry for a few years and becoming the mother of three children, she tried again, this time sitting among eager 18-year-olds in Alan Cameron’s French class in the mid-1980s.

“He came around asking what we’d done this summer and all the young ones were talking about having travelled to Europe or working a cool job, and when he got to me tears just started to fall. I felt so out of place. Alan was patient. He kept going around the class talking to students, and eventually he reeled me in and got me talking.

“I have to say, instructors like Alan Cameron, Jack Gaston, Virginia Cooke, and others, really did a great job of making you feel welcome as a person and a student. They made me feel like I belonged here, and I could do it.

“I found a small group of mature students, and we’d study together. And the younger students were very welcoming and often asked to join in. UFV really was a place of hope, belonging, and intellectual curiosity for me.”

Griffiths wound up loving the classes she attended at Fraser Valley College, before transferring to SFU to finish her degree because the college only offered first and second-year classes at that time.

She never imagined she would spend almost 30 years working at what became UFV, and one day retire as the Associate Vice President of Human Resources.

Her entry into employment at UFV began as an assistant in the Writing Centre, where she enjoyed working with students and helping to them refine their writing while retaining their own voice.

“Working with students was an opportunity to give back to a place that had given so much to me,” she recalls.

A few years in she served as recording secretary for the Faculty and Staff Association in a volunteer role, where she got a behind the scenes education on labour relations and interpersonal dynamics.

“I learned a lot by watching how the faculty members on the executive interacted, and how really strong and divergent personalities could work together for a common goal.” 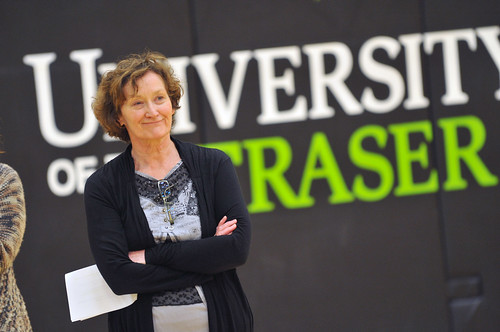 Her confidence increasing as she matured in lockstep with what was by then a university college, she was elected Grievance Chair and eventually President of the Faculty and Staff Association (one of the few staff members to have held that position).

In 1994 she made another big leap, joining Human Resources (then known as Employee Relations) in a brand-new coordinator role, working with long-time leader Barry Bompas.

“At first I asked, ‘What am I supposed to be doing?’ and Barry told me, ‘Talk to people. Find out what they want and what they think.’ He was an amazing person to learn from, and there was a really good group surrounding us in HR and Finance. It was an easy place to learn and grow as an administrator.”

And then she found herself with some pretty distinctive shoes to fill once Bompas retired and she was named Associate VP of Human Resources.

“Those early years were tough, because we said goodbye to a colourful legend in Barry, and there was a deliberate restructuring to decentralize administrative power and widen the decision-making process. So it wasn’t easy to follow the person who was always able to fix everyone’s problems, and not having as much leeway as he did to do so. But again I was working with a very supportive group.”

Griffiths has grown up in the UFV culture, and is analytical when asked to define it.

“Some would say that UFV in the early days was like a family, but it was more like a small village. Not everyone in a village gets along all the time, but you depend on each other, make allowances for individual personalities, and get on with doing what you need to do. In our case, we care for each other and our students, and that’s the point of it all. As we grow, of course we’re less like a village than we were when we all knew each other, but I think that sense is still alive. It’s still overall a pretty happy place that is there for the students at its heart.

“Barry Bompas hired people who liked people, and that went a long way to making this the place that it is.”

She has found joy in her work every day.

“I can’t say I walked in thinking, ‘Hooray, I get to negotiate a contract today!’ But how lucky I have felt that I get to walk in the door of a university every day, by classrooms full of young, optimistic students. I worked in an HR office full of people I liked, and it was always possible to find somebody interesting and friendly to talk to down every hallway.”

Even in the tough times she was impressed by reactions of people involved.

“When you work in HR you have to do some hard things. I learned over and over again that in those difficult circumstances, doing things that you don’t want to, to people who don’t want it to happen, they still respond well to being treated with respect, dignity, and compassion.”

There are many highlights when you’ve put almost three decades in at a place like UFV.

For Griffiths they include all the employee recognition evenings, the summer barbecues, and special field trips like the one to Victoria to mark the university’s 25th anniversary. Then there was the infamous 1999 Christmas dinner cruise, booked on a boat far too small for all the revelers. So small that it was difficult to move. Undaunted, theatre staffer Astrid Beugeling started a conga line, weaving enthusiastic revellers merrily through a crowd that barely had room to breathe and eventually getting almost everyone to follow.

“It’s long been said that if that ship had gone down, our university would have been in real trouble,” Griffiths  recalls with a chuckle.

She volunteered at Convocation for many years, and one of her jobs was ushering grads across the stage. In the earlier years, many were ones she knew, and it was a joy to see them cross the stage.

“When my daughter was graduating she came up the ramp and planted a big kiss on me and made me cry. Good thing I had my back to the audience.”

Always publicity shy, Griffiths was reluctant to even have a retirement party, but the thought of not being able to say goodbye to UFV properly changed her mind.

“I’m leaving the HR department in a good place. There are many great people working there and they are ready to take care of things from now on. I am happy to be retiring, but sad that I won’t be seeing all the wonderful people at UFV every day, and that I won’t be surrounded by all those young students, so full of optimism and energy.”

3 Responses to Griffiths ran the gamut, from student to AVP: reflections on almost 30 years at UFV