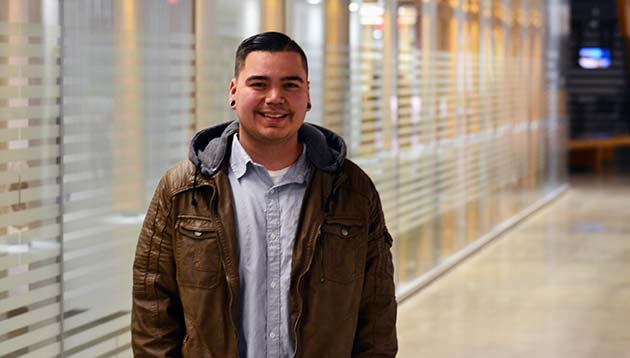 A leap into the unknown

“I knew if I didn’t make a change I would regret it for the rest of my life.” Evander Boudreau could no longer ignore the fact that it was time for a new direction. “I lost the passion for my work,” he says. “To be honest, not enjoying my job made me very unhappy in my life.”

Evander, who had grown up in Chilliwack, was only 26 but had been working in the food service industry for 10 years. He knew it was time for a big change and started researching training options for something he had always been interested in — welding.

“I’ve always been fascinated by how much goes on in welding,” he says. “There is much more to it than just joining two pieces of metal together;
there is so much science behind it.”

After researching his options, Evander settled on UFV’s Welding Foundations certificate, a 34-week-long full-time program. “I chose UFV because of the great reputation they have,” he says. “Their certificates are well recognized.”

But having worked his entire adult life in one industry, leaving it wasn’t an easy step to take. “Finally making the decision to change careers and
following through with it was a huge challenge,” says Evander. “Welding was a completely new direction. I’d be starting from zero again. I think my biggest challenge was getting over the fear of failure.”

Powering through the challenges

“In the end, I overcame these fears by realizing how unhappy I was in my current career,” says Evander. “I decided to just put everything I had into
the welding program.” As part of a partnership program between UFV and Seabird Island College, he started the Welding Foundations program in
January 2016.

After a decade away from school, he initially faced some challenges. “There was a lot of memorization required for the different functions involved in welding,” he says. “I also had to train my body to handle labour and learn how to use tools properly.”

But, determined to learn and understand the material, Evander pushed through — supported by his family, his friends, and the dedicated instructors at UFV. “The instructors were very approachable when you needed help,” he says. “They wanted to see you succeed. If you didn’t understand something, they would explain it in different ways.”

Evander loved how hands-on the program was, and how he and his classmates spent most of their time gaining practical skills in the shop. “My favourite thing about the program was that I could apply what I learned in my everyday life,” he says.

Doing what you love

Evander successfully completed his program August 26, 2016, only six and a half months after beginning that January. The same time a year before, he was trapped in a career he disliked and uncertain how he could change his situation. Now, his future was still uncertain, but he was certified in a field he loved and had several opportunities in front of him.

Within three weeks of completing the program, he was hired by a manufacturing company in the welding and fabrication trade. Having made
a complete change of careers, Evander is starting from the bottom again, but slowly gaining more experience in his trade. Now, he has a long-term
plan he is passionate about: getting as much experience and knowledge as a welder and fabricator as he can and, someday, becoming an instructor.

And what would Evander say to a friend thinking about going back to school to change careers? “Just go for it,” he says. “For me, education has opened up so many windows of opportunity. I’m grateful I took the leap.”