Winter snowfalls may be beautiful, but they make getting from Point A to Point B that much more difficult. People working, studying, and taking exams at UFV this past week can thank our Facilities department for clearing the way for them to walk around on campus once they got there.

The Fraser Valley was hit with a heavy snowfall overnight on Thursday, Dec 8, and again over the next few days.

The Facilities department sprang into action at 6 am on Fri, Dec 9. A crew of 11 people gathered at the Abbotsford campus to begin clearing snow from sidewalks, stairs, and entryways around the campus to ensure safety of students and staff.

Even more snow fell in Chilliwack, and the crew there included Kartar Thandi, Brandon Tournier, Brian Wiebe and Christine Jones.  The crews worked hard clearing the snow as yet more snow kept falling throughout the day.

The snowfall continued over the weekend with Facilities staff pulling a morning shift at both the Abbotsford and Chilliwack campuses to clear the snow for Saturday exams and welding classes, as well as an afternoon shift at Abbotsford concentrating on the east side of the campus for exams in Buildings A East and the gym, as well as making sure the library remained open for students. Efforts continued on Sunday afternoon with a smaller crew clearing snow making sure the campus would be in better shape for students and faculty returning to UFV on Monday Dec 12. 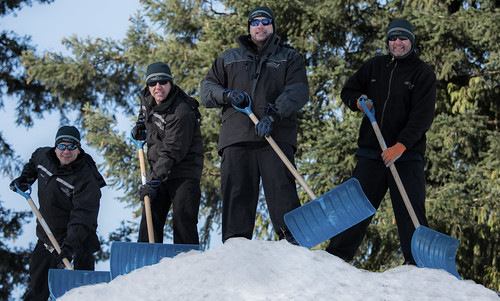 Security officers have also been working extra hard since the snow started falling, patrolling through the snow and compiling weather updates several times a day.

7 Responses to Facilities crews clear the way on campuses