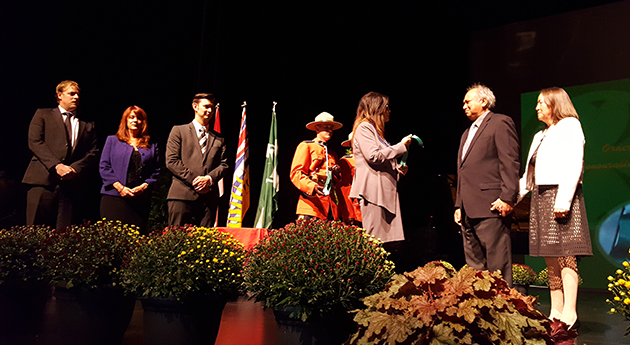 UFV Chancellor Gwen Point and her husband Steven, both of whom have many connections to UFV, were honoured with the Order of Chilliwack on Thursday, Oct 6. They are the fifth and sixth recipients of the award.

From a City of Chilliwack news release:

The Order of Chilliwack was presented to the Honourable Steven Point and Dr. Gwen Point on October 6, 2016 by Chilliwack Mayor Sharon Gaetz and council.

“This award is being presented to the Honourable Steven Point and Dr. Gwen Point in recognition of their contributions to the community,” said Mayor Sharon Gaetz. “Their extraordinary list of accomplishments makes them extremely deserving of the Order of Chilliwack award, which is the City’s highest honour.”

The Honourable Steven Point has served Chilliwack and surrounding First Nations communities for close to 30 years in a variety of roles after graduating from UBC’s law school (and beginning his post-secondary studies at UFV, then Fraser Valley College). He has served as Chief of the Skowkale First Nation, Tribal Chair of the Stó:lō Nation and Grand Chief of Stó:lō Tribal Council, the Chiefs’ representative for the Stó:lō Nation Government House, and managed the Lands Department of the Stó:lō Nation. In 1999, he was appointed a Provincial Court Judge. He received an honorary degree from UFV (then UCFV) in 2000. From 2007–2012 he served as Lieutenant Governor of British Columbia. In 2007 he received the Order of BC, which recognizes persons who have served with the greatest distinction and excelled in a field or endeavour benefiting people of the Province. It is the highest form of recognition the Province can extend to its citizens. In 2012, the Honourable Steven Point served as Chair of the advisory committee on the safety and security of vulnerable women. In 2014, he was reappointed to the bench by the Ministry of Justice. His awards include the Order of BC and the Joseph H. Cohen Award from the Justice Institute of British Columbia Foundation.

Dr. Gwen Point is a respected Stó:lõ leader and mentor and has held a number of provincial government and regional posts supporting education, children and family services and First Nations communities. From 2007–2012, as spouse of the Lieutenant Governor, Dr. Point served as BC’s Chatelaine, a role that demanded her participation in numerous and diverse public engagements. Dr. Point has received numerous prestigious awards. In 2012, the University of Victoria awarded her an honorary doctorate in Education. UFV presented her with the Betty Urquhart Community Service Award in 2003. She has also received the Ambassador Award from Aboriginal Tourism BC and was recognized as Honorary Witness by the Truth and Reconciliation Commission of Canada. Dr. Point has received a number of community awards for her contributions to Stó:lō language and cultural education, including recognition by the Stó:lō Nation, the Seattle Art Museum and others. In 2006, the Chilliwack School District set up two bursaries in her honour. She served as a faculty member at UFV for several years. In 2016, Dr. Point became the second Chancellor of the University of the Fraser Valley.

The Order of Chilliwack, established in 2001, is an award granted by Chilliwack City Council to deserving citizens of the community by virtue of outstanding achievement or long term contributions to the community. To date, there have only been four other recipients of this award: Frederick H. Bryant (2001); The Rotary Club of Chilliwack (2002); Dorothy Kostrzewa (2008); and Brian Minter (2011). The latter two also received honorary doctorates from UFV.