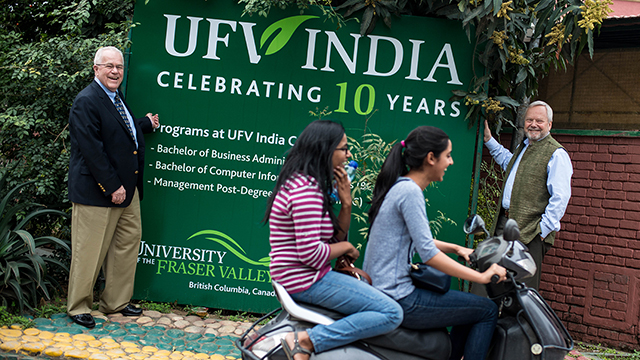 Skip Bassford with Mark Evered at UFV’s celebration of 10 years in India in March.

A familiar face will be roaming the hallways of UFV’s Chandigarh campus providing leadership and expertise for the next few months.

Former UFV president Skip Bassford, who was instrumental in founding UFV’s Chandigarh operation, will serve for the fall term as honorary Interim Principal for UFV Chandigarh.

Dr. Bassford arrived on site on Aug 22, and will stay through Nov 30.

An experienced academic administrator, he will provide on-site leadership and support, working closely with UFV India’s Director of UFV Chandigarh campus, Gurneet Anand. Bassford is known for his work in applied and professional ethics, and will also be teaching in this area while at UFV Chandigarh.

Lorne MacKenzie of UFV’s School of Business will continue his association with UFV Chandigarh, serving once again as UFV Chandigarh Academic Liaison, beginning in September 2016. MacKenzie had taken on an extended role in Chandigarh this past academic year.

The appointment of Bassford as an interim principal will provide UFV with his unique expertise and insight (gleaned from being involved in Chandigarh operations from day one), according to Dr. Peter Geller, UFV Vice Provost and Associate Vice President, Academic.

“Gurneet Anand is doing an excellent job running the administrative side of things,” Geller noted. “UFV Chandigarh is growing and this term appointment provides an opportunity to learn from Skip’s extensive background in academic leadership. It’s a bonus that Skip will step into that role on an interim basis while we plan for a permanent position, because he brings so much knowledge about our Chandigarh site’s history and development with him.”

Bassford says he’s delighted to return to UFV on a temporary basis and to the Chandigarh campus he helped found.

“I have always been committed to multiculturalism and to its flip-side, internationalism. That is why, given the cultural make-up of the Fraser Valley, I was pleased during my term as president to help create and support both the Centre for Indo-Canadian Studies and UFV Chandigarh. Last spring I attended the 10th Anniversary celebration of the Chandigarh campus, and was very impressed to see how far it had come. When it was decided that it was time for this campus to have a principal, and Mark asked me, given my history with the project and administrative experience, to assume the post for its inaugural semester, I was quite taken aback.  I have been leading a very happy and active retirement, and was not anxious to disrupt it.  But upon reflection and discussion, my wife, Jane, and I jointly decided that I should heed the call.

“I have been in Chandigarh for a week now and know it was the right decision. The enthusiasm of the faculty and staff is simply phenomenal, as is their commitment to student learning. It is going to be a great term working with them, and I sincerely hope, being of real use to them as they take the next steps on their academic journey.”

President Emeritus of the University of the Fraser Valley, Dr. Bassford served two terms as President, from 1998 to 2009. He brings extensive experience in post-secondary administration, including as Dean of Atkinson College at York University where he started their Continuing Education Division, founded the York Nursing program, and developed close working relationships with several colleges, bridging the gap between colleges and universities in Ontario.

During his tenure at UFV he was noted for leading UFV’s development from a university college to a full university. He oversaw the development of UFV’s first graduate programs, launched the world’s only Centre for Indo-Canadian studies (in Abbotsford), and established UFV’s campus in Chandigarh, India. During his tenure as president, the university more than doubled in size.

Dr. Bassford holds a bachelor’s degree from Reed College, a master’s degree from the University of Hawaii, and a doctorate from the University of British Columbia. He has authored numerous articles, book chapters, conference papers and invited addresses. In addition to his professional work, Dr. Bassford has had an active community involvement, serving on many health care, educational and economic development boards. He is a recipient of the Queen Elizabeth II Golden Jubilee Medal, awarded for outstanding and exemplary contributions to Canada.