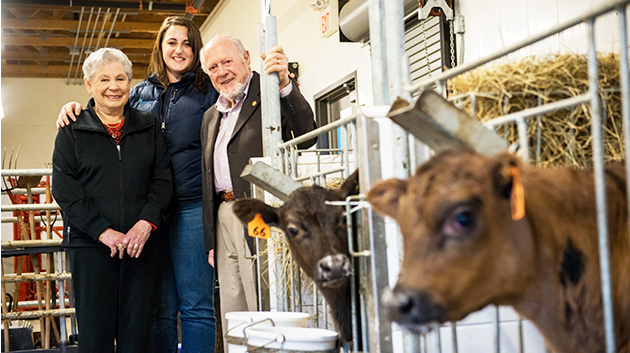 Beryl (left) and Walter Sussel, with bursary recipient Morgan Umpleby in the middle.

Walter Sussel doesn’t actually remember leaving Germany, but the story of his journey as recounted by others is seared into his brain. A little boy. Four years old. Holding the hand of his two-year-old sister. Being told by a trusted adult to walk along a forested path. That his uncle was waiting for him on the other side. That they would see Mom and Dad soon.

It was 1936 and things were not looking good for Jewish people under Hitler’s regime. Walter’s parents crossed the border surreptitiously into France, leaving the children behind to avoid suspicion of their intent to flee.

A new life awaited them, first in Holland, then in Canada, and eventually, in Chilliwack.

Eighty years later, Walter and his wife Beryl are grateful beyond words for the country and the community that took in his refugee family.

Before leaving Germany, Walter’s father Sam was a lawyer and his mother Anne was a pediatrician and the first female graduate from her medical school. His parents knew they had to flee Germany because, being Jewish, they were banned by the Nazi government from carrying on their professional duties in state institutions such as law courts and hospitals.
“Dad was one step ahead of the Gestapo in leaving,” recalls Walter. “Mom and Dad were very grateful for the support they received once they got to Canada and, over the years, they did a lot to give back to the country that provided refuge to our family.”

Although they brought the knowledge gleaned from their extensive education with them, they didn’t practise in their chosen professions in Canada; it would have taken too long to re-qualify and they had a family to raise.

So Sam became a farmer, despite not knowing much about farming except “which end of a cow to milk,” according to Walter. His new neighbours on McSween Road in Chilliwack supported and guided them. In return, as a gesture of friendship, he helped them out on the business side, with accounting and farm administration.

“Once it was accepted that I had no desire to take over the family farm after finishing high school, Dad started an accounting and farm management consulting business,” Walter recalls.

Eventually even the Income Tax department referred farmers to him to help with the new herd regulations that were not well understood by many of the farm community at that time.”

Mother Anne helped with the farm work and raised the children. In later years, Anne and Sam were also very involved in the lives of their grandchildren, including Walter and Beryl’s four daughters, all of whom went on to excel in university and in their scientific and professional careers.

Walter studied microbiology at UBC after finishing high school in Chilliwack, then served as an officer in the Canadian military. Like his father, he wanted to give back to his adopted country. At UBC, he met Beryl, who was completing her studies in public health nursing. They married following graduation. Four years later, after service in both Canada and Korea, Walter left the military and, accompanied by Beryl, returned to university to study dentistry.

After Walter received his dentistry degree, the Sussel family moved back to Chilliwack to open a dental practice and to raise their daughters, drawn by the natural beauty and strong sense of community and the presence of Beryl’s mother and Walter’s parents.

Sam and Anne lived to be 85 and 100 respectively. Having outrun the Nazis, they actively enjoyed retirement and seeing their grandchildren grow up.

“My mom was a real role model for our four daughters,” says Walter.

When they passed away, the family decided that that Anne and Sam’s memories would best be honoured by creating scholarships and bursaries in their names to help future generations of students.

Three scholarships in Anne’s name are awarded to the top female Chilliwack public high school science graduates who are going on to a science degree program at any university, including UFV.

The Sussels wanted to honour Sam’s experience as a farmer and farm business consultant. They have partnered with UFV’s Agriculture department to honour a student who excels in the business side of agriculture with the Sam Sussel Agri-Business Scholarship. They met this year’s winner, Morgan Umpleby, at a special ceremony at UFV recently.

The Sussels know from experience the struggle of returning to school as a mature student, trying to study, pay the bills, and raise children at the same time. Walter was an older student when he returned to study dentistry and Beryl kept the family fed by “figuring out a hundred ways to cook ground beef and beans,” as well as working part time as an RN.

Through the family endowment fund they have set up with UFV, they are also funding the Dr. Walter and Mrs. Beryl Sussel Bursary. It will provide one or two mature students with funding assistance for their studies each year.

“We want to leave legacy and we have a real affinity for mature students,” says Walter.
“It’s nice to be able to help somebody, especially someone who might be a single parent,” adds Beryl. “We all know going to school is a struggle, so we are happy to support students through this bursary. There is a lot of scholarship funding out there for new high school grads entering university, but not as much for the older students who wish to complete a degree program after being away from studies for a number of years. We want to help give someone who really needs it a leg up.”

The Sussels’ connection to UFV goes back decades. As a dentist, Walter taught a forensic unit each year to dental assisting students. His Rotary Club has supported UFV initiatives over the years and when community members wanted to start a local ElderCollege for the 50-and-older set, he was invited to help plan it because of his experience in writing grant proposals. ElderCollege Chillliwack is a non-profit society founded in 1999 that has enjoyed a long and most productive partnership with UFV.

“ElderCollege is a great outreach program and UFV has been very generous in providing facilities and support,” says Walter. “It’s just another example of the great community spirit and volunteerism that you find so much of in Chilliwack.”

As Walter and Beryl reflect on their many decades in the Fraser Valley and the fact they are, as Walter puts it, “on the downward slope of our lives,” they are happy to leave a legacy that will honour his parents and support post-secondary education at their local university.

“Our family experienced a lot of kindness and help when we arrived in Canada. We want to return the favour and pay it forward.”