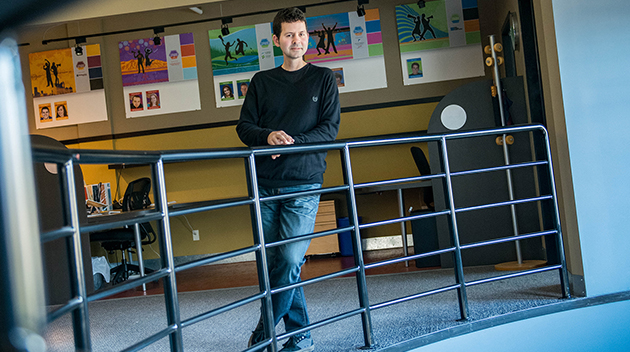 Banking on evolving business makes perfect sense for Tim McAlpine. A UFV graphic design alumnus with clients across North America, McAlpine sports a Jobs-like look with black sweaters coating the thin build of a man who loves all things Apple.

He looks at business differently too, thanks to a “Yoda moment” with his instructor 27 years ago.

“He said,” McAlpine recalls, “‘There are no jobs for graphic designers.’”

The instructor, the late Mircho Jakobow, was teaching fine art and printmaking to McAlpine, who was barely out of high school but already deep into the then-computerless Applied Arts program at Fraser Valley College.

“I thought ‘what have I invested this time for?’ I was dumbfounded. Then Mircho said, ‘…you have to make your own work.’”

McAlpine never looked back. The designer quickly became an entrepreneur, and eventually found a niche market that allows him to serve clients near and far from his home base of Chilliwack.

Working for a sign shop while living at home, he started his company after graduating at the age of 21. He began building a client base as the lone worker at McAlpine Graphic Communication; four years passed before he hired his first employee and became McAlpine Design Group (MDG). He designed branding, expanding to brochures, posters, websites, and more.

“But it’s interesting, when I got to that stage I really found it wasn’t for me. When you’re dealing with a custom professional-services practice there’s this no-man’s-land between a dozen employees and 25, and you either push through it or you recede to something you’re more comfortable with.

“And being a creative person I found when we got to that size I was just a manager, I wasn’t doing any creating and it was very much all custom work for the clients. It was high pressure.” 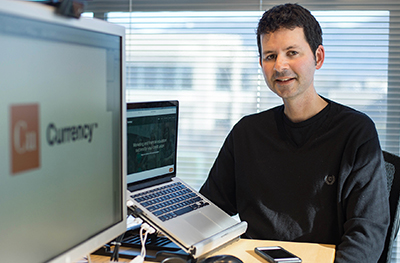 He also dropped a part of the job most designers like the least: client relations. Or, at least, those micro-managing clients draped over his designers’ shoulders.

“We were always at the whim of a client. I’m not complaining about my past, it’s just been an evolution. You were only as good as your last idea. It’s a constant grind, and everything is to the brand. It was getting too hard chasing 15 bed-and-breakfast ads for the back of a tourism magazine we were doing.”

These days, Currency creates a complete set of marketing materials monthly, built around educational financial concepts ranging from credit scores to budgeting basics that target an audience between 15 and 25 years of age. The program’s called ‘It’s A Money Thing’ and 70 credit unions have signed on from Texas to Abbotsford. McAlpine’s goal is 100. Each subscribing credit union receives the exact same content, though individual logos are inserted into products that range from social media and print materials to animated short features using voice actors from as far away as England. 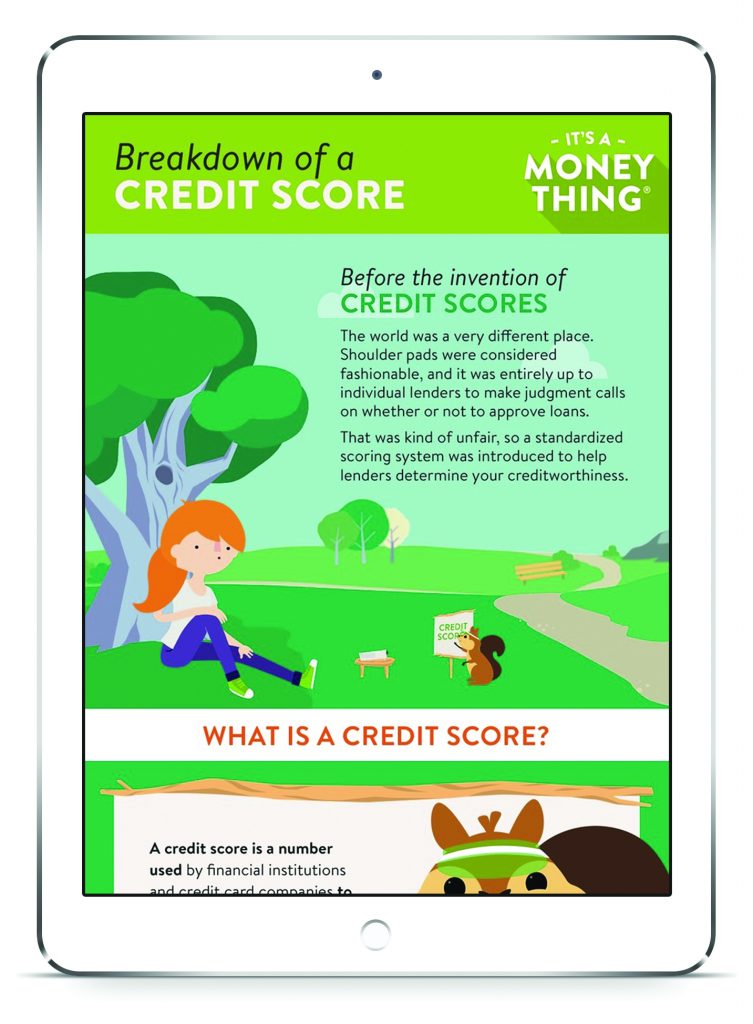 “I’ve gone through this transition of high-service, customized selling hours to now being in a place where I can productize something many clients want to participate in, and minimize the amount of customer service and consultation. They’re licensing a pre-created product,” he explains.

“It’s been quite liberating, I’ve always been more curious about designing the business as opposed to doing the day-to-day design work. We’ve reinvented numerous times over the years. I don’t know if that’s entrepreneurial ADD or foresight …
but I’m going to go with foresight.”

It’s A Money Thing followed the footsteps of another McAlpine innovation, Young & Free. Started in 2007, it involved youth educating their peers on credit union services. Individuals between 19-25 were hired in cities throughout North America to run a website, create videos, and write blogs promoting free chequing accounts. Credit unions in 11 U.S. states and two provinces signed on, attracting more than 200,000 new young adults to credit unions.

“These were the early days of social media. Facebook was a couple years old, Twitter was new, YouTube was just acquired by Google. Companies were trying to figure out how to play in this space so we thought there was a real opportunity to position a real live person to represent the brand.”

Now employing six, Currency isn’t just cranking out a product simply because it sells. Credit unions helped McAlpine get his start back in 1990, and they’re still something he believes in today.

“I started with First Heritage Savings before they merged with Delta Credit Union to become Envision Financial. That gave me a taste of doing much larger budget work, but I really had a fondness for the business model of credit unions and what they’re all about: a community-based cooperative business model.

“I found it’s quite meaningful to work at trying to affect young people’s financial behaviour.

“Credit unions are community-based, member-owned, and there’s a real democracy to it, not a revolving-door relationship between the customer entity and the stockholder. There isn’t that motivation, it’s more altruistic,” he says.

“It’s something I believe in, plus they have budgets. I always joke that they have a vault.”

Currency’s physical space has evolved with its client base. Starting in a 500-square-foot room, McAlpine steadily upgraded until landing in his current Chilliwack location 15 years ago. Ever the entrepreneur, he immediately invested in a lease-improvement loan to build a stylish second floor inside the new tilt-up structure, nearly doubling floor space while still paying the same lease rate, based on original square footage.

He incorporated offices, kitchens, boardrooms, and even a photo studio that now serves as an intimate lecture theatre as part of his latest endeavour: Cowork Chilliwack. Created to provide private and semi-private work space for creative people tired of calling Starbucks home, Cowork boasts 3,500 square feet of space.

“My thought is if I can make a little bit on it and get some creative like-minded people together, then why not?”

Away from the office, McAlpine is a popular fixture on the credit union speaking circuit, plus a well-received TEDx and Pecha Kucha presenter. He writes for industry publications, serves as board chair of Mount Lehman Credit Union, and is past president of the Chilliwack Chamber of Commerce.

He also serves as a director for Chilliwack Economic Partners Corporation.

One key to the jumpstart success that set McAlpine’s career in motion still rings true to students today.

“After high school I considered the Emily Carr option, but I chose UFV instead. I liked the local aspect. I could live at home in Chilliwack and commute to Abbotsford, I didn’t have to incur debt, and I could continue to work,” he recalls.

“I felt it was a really solid program. Because I earned my education and training at UFV, I could jump into the work force and make a difference right away. And at that point I didn’t have a family yet so it was easy to start my own business. Things really mushroomed from there.”

McAlpine was among those consulted when UFV rebooted its Graphic and Digital Design program in Mission earlier this decade. He advised that they concentrate on digital, but also traditional design skills.

“A lot of people are self-taught web designers but they don’t have any formal training in traditional typography or design. That history and skill-set is important.”

His advice to those students?

“Nothing’s going to fall in your lap,” he warns.

“Constantly be aware that you’re probably not going to be doing the same thing in five years. We’re a 26-year-old company but we’ve had to reinvent every five years.”

You can bet the bank Currency’s next reinvention will still involve credit unions.

“Specialization seems like a really small door that you go through, but it’s incredible once you get in. We’ve selected this credit union door, but there’s an extensive amount of opportunity and each thing leads to the next. We’re pretty early into this chapter,” he says. “I can’t wait to see what’s next.”