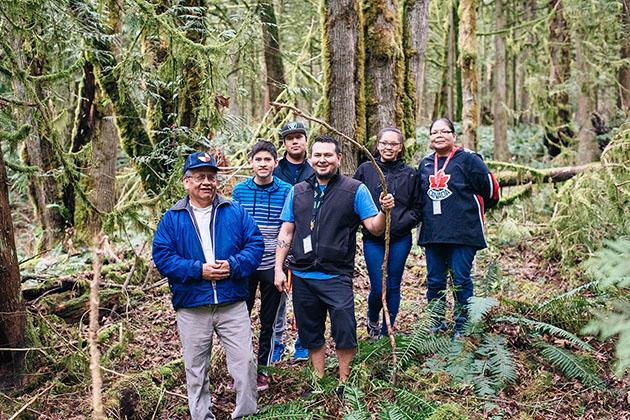 Participants in the Land-Based Resiliency project in the forest at Bridal Falls.

We step into the forest near Bridal Falls outside of Chilliwack and the trappings of modern-day life slip away. There’s just us, the mist, the cedar, the ferns, and the birds and animals quietly observing.

Our mission? Finding food and medicine in the forest to gather and harvest, along with a path towards healthier communities.

Our guides, from the Seabird Island Band, are right at home on the land. It doesn’t take long to find what we’re looking for. Jonny Williams, a youth and cultural worker leading our adventure, immediately harvests licorice root, an all-natural breath freshener.

Then Angie Chapman, community services program manager for Seabird, asks me if I know the safe way to eat raw stinging nettles, noting teens on last week’s excursion had no problem learning how nettles are a safe source of energy if you’re out in the woods and short on food.

Chapman deftly rolls and wraps a leaf so the nettles aren’t exposed.

I pop it in my mouth and try to swallow, but it unravels, stinging all the way. Stinging nettle: 1; rookie forest food forager: 0.

“The things that will hurt us will also help us. The things that give you pain will help with pain,” observes Seabird Elder Andy Louie, who’s also along on the forest walk.

“If you go in with a good mind and heart, and pray to the nettle, it won’t hurt you,” assures Williams. 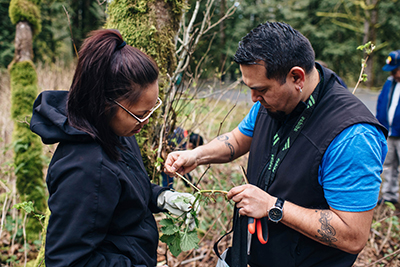 But I’m just a visitor, not the primary focus for this excursion. The main audience are the Seabird teens on the hike, who are learning the ways of the land from Williams, Chapman, and Louie.

Istvan Thomas, aged 17, already knows how to find the Devil’s Club we’re looking for. He’s brought along a sample from home. Once he finds some, it’s suddenly obvious that it’s all around us. He and the others start to strip away the outer layer, harvesting the stem for a myriad of medicinal purposes.

Ricki Sam Greene, 18, isn’t convinced about eating the stinging nettle. She stung her hands just picking it up. But she’s listening, watching, absorbing, along with her boyfriend, Sonny Mussell.
We walk and talk, and Louie offers his observations. He didn’t always know about Aboriginal traditions; residential school and being orphaned early cut him off from his language and his culture. But by attending the sweatlodge and taking part in other cultural activities, he has become more aware of the Stó:lõ ways.

“All people used to have knowledge of the land, but most have lost it,” he notes. “When you wake up in the night with a jolt sometimes, you are feeling some of it returning to you. We need this knowledge more than ever. Modern food is spreading bad health and cancer. We need to know how to eat from our land again.”

A hush falls over the group as Williams, a UFV alumnus who some call a young Elder or Elder-in-training, shares the story of Mount Cheam (Lhílheqey) and Bridal Falls. He explains how the falls are the tears of the mountain because she regrets leaving her family. The teens listen as Williams refers to how his mother and grandmother shared this story with him, and so continues a timeless oral tradition.

“I’m sharing this story so I don’t forget it and you don’t forget it,” he says. “My mom and grandma told me not to be stingy with knowledge, to share it and teach what you know.”

This isn’t just any walk in the woods. The excursion, and ones like it offered weekly to Seabird youth, is a conscious effort to connect the youth to the land, to give them a sense of place in the world, and the resiliency that comes from being grounded in culture, community, and place.
And its part of a major research project in which the University of the Fraser Valley is a partner. Fraser Health, UFV, Seabird Island Band, and Stó:lõ Nation have received a $99,000 grant from the Canadian Institute for Health Research (CIHR) Pathways to Health Equity for Aboriginal Peoples initiative.

The project is developing and piloting a youth resiliency strategy with a goal of protecting youth from suicide before they even start down the path to considering it. It’s a serious concern. In 2012 there were seven suicides among Stó:lõ youth in a six-month period. And there have been more since. “This project is special because the traditional approach to suicide prevention has been to put funding into addressing the problem once it has entered a stage of urgency. We are investigating this question: what if we put funding and energy up front, in promoting health and wellness, so there’s less need for crisis intervention, and indeed less crisis, in the future?” says Dr. Adrienne Chan, UFV’s Associate Vice President of Research.

“Suicide rates among Aboriginal people are quite high, not only because of individual reasons that kids experience, but because of the systemic issues that have gone on historically in Aboriginal communities, uch as residential schools and systemic oppression,” Chan adds.

The goal of the research is to examine lessons learned and results gleaned through the project so that the resiliency strategy can be adapted for other Aboriginal communities. The project draws on Indigenous ways of knowing as they are lived in Seabird Island community.

Chan emphasizes that this is a community-driven research project.

“The Seabird Island community is really driving what we do — it’s a true collaboration,” she says. “Indigenous health managers from Fraser Health approached us saying they and the Seabird community wanted to do something about suicide prevention and that they wanted UFV involved. We have a reputation because we have made indigenization a priority. We know it’s possible to run a community-driven research project because we’re doing it. My name’s on the top
of the project description, but I am a humble servant of the project.”

Over half of the 18-person research team consists of Aboriginal researchers and community representatives. 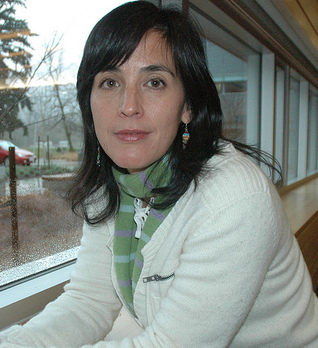 In addition to Chan’s role as a lead investigator, the project involves UFV representatives Dr. Wenona Victor, a professor of Indigenous Studies, and Hugh Brody, UFV’s Canada Research Chair in Aboriginal Studies. Brody is consulting on the project, reviewing plans and research outcomes.
Victor is an “on-the-ground” researcher, paired with Heather McDonald, a non-Aboriginal nurse with a doctorate in Aboriginal health who works for Seabird Island.

Victor refers to her and McDonald’s approach as “two-eyed seeing.” By pairing an Aboriginal and non-Aboriginal researcher, they are ensuring that indigenous approaches to inquiry and research are integrated into the project.

For instance, the research team took part in a two-day workshop on Indigenous research methods.

They are working with the planning team, offering feedback and training. They will measure and monitor results, including suicide rates, how connected to the land the youth report feeling, and their sense of cultural identity.

“What this project is trying to achieve is something we could all take a lesson from,” Victor says. “We need to stop our busy lives and get to know the land we live on. The youth are being encouraged to be caretakers of their land, and their part of the river, to say: ‘if this is mine, and it is, then I’d better act like it and take care of it.’”

The next phase of the project is to take the model created at Seabird Island and bring it to other Aboriginal communities, including Bella Coola, Mission, Sumas, and Scowlitz.

Angie Chapman, who’d earlier tried to teach me how to eat raw stinging nettle, organizes the youth outings and is one of the Seabird Island representatives on the research team.

“Our goal is to connect people back to the land and to their identity of who they are and where they come from. There is so much knowledge and history that Elders have — we want to gather it in a sit el [basket] and pass it on,” she says.
Chapman is careful to be sensitive to different approaches even within the community.

“There are different ways of doing things, even traditional things, so we try to listen to all voices. Elders and youth both had input into the design of the program and what we do. The youth have let us know that they are tired of meetings! They are eager to be out on the land doing things, so we are happily arranging that.”

The expeditions may extend into safety training, overnight excursions in nearby wilderness, and other nature-based activities. 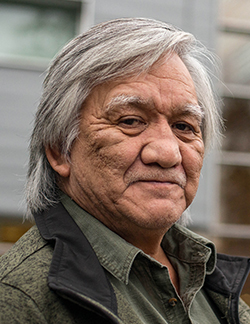 Reid Peters, 67, graduated from UFV in June 2016 with a Social Services diploma  with a First Nations option. He is one of the Elders taking part in the program, and recently led the group on a tour of the shoreline of the Fraser River.
“I showed our youth my fishing ground, which has been in our family for generations, in the hopes that they too can find a good fishing spot that they can maintain for generations. It is a great connection to family, river, and land.”

Back in the forest at Bridal Falls, the youth aren’t saying much, but they are busy watching, listening, absorbing, and doing. Laughing and relaxing. Reconnecting. Learning. Being at home on the land. And building a healthy connection to their culture and community. And that’s what it’s all about.

Time, research, and analysis will tell if the goal of reducing youth suicide is reached.
But it’s easy to see that encouraging youth to connect with their land is an act of healing
and empowerment. 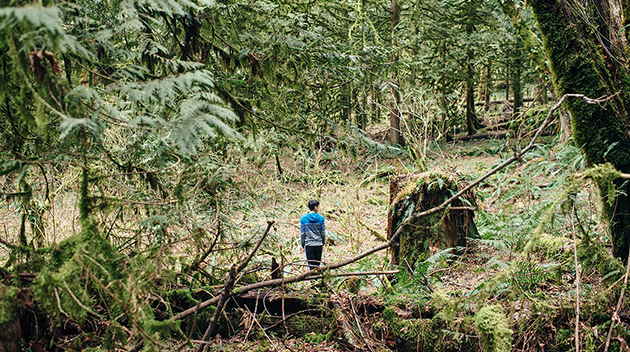 back to the land, featured, indigenous ways of knowing, land-based resiliency, Seabird Island