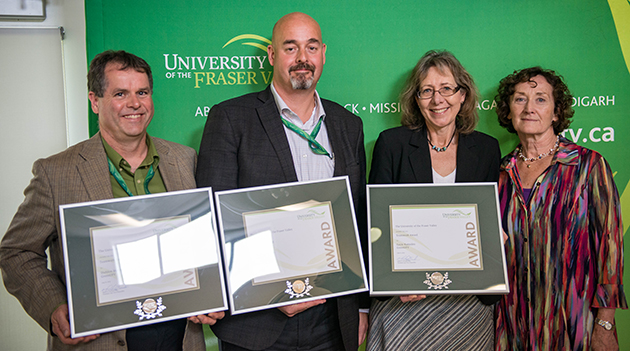 The best teams are made up of groups of individuals who bring a diversity of strengths to the table.

Such is the case with UFV’s Green UFV team, inaugural winner of the UFV Teamwork award, presented at the UFV Excellence Awards ceremony on June 8.

GreenUFV is a cross-functional team that works on sustainability initiatives at UFV, directly linked to the university’s strategic goal of being a leader in the sustainable development of the Fraser Valley.

Green UFV is coordinated by Pat Harrison, a lab instructor in the biology department, but also includes leaders from the Facilities department (Mark Goudsblom and Sheldon Marche), other faculty members (Gayle Ramsden), and a biology student (Alyssa Bougie, who was also this year’s sustainability coordinator).

The Green UFV team worked to keep environmental issues top of mind at UFV, promoting greenSPEAK seminars and workshops put together by the Faculty of Science’s Centre for Sustainability (which Harrison also chaired), and presenting awareness events such as Turn it Off Week, Sweater Week, Recycle My Cell challenge, and a waste audit.

Their campaigns focus on themes such as energy, recycling/composting, transportation, and education.

They make an important and notable contribution to the achievement of the university’s goals, including the reduction of UFV’s power consumption.

“When we were imagining what kind of group might win the inaugural UFV Teamwork award, we thought that Green UFV really exemplified what we were looking for — a team that’s interdisciplinary, comprised of faculty, staff, and students, and working to raise awareness of important issues,” said Diane Griffiths, AVP of Human Resources, who introduced the team at the award ceremony (but was not involved in the selection process).