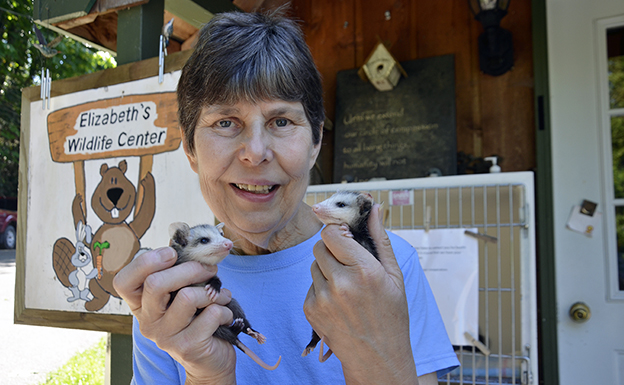 Some people say volunteering is for the birds — as in it’s not worth doing. But for Elizabeth Melnick, volunteering is literally for the thousands of birds and other wild animals that she and her helpers have saved and attempt to rehabilitated over the years.

Melnick has been taking in injured birds and animals at the non-profit Elizabeth’s Wildlife Centre in Abbotsford for 30 years. Her backyard contains aviaries and other shelters, and she and her team of volunteers are kept busy daily caring for their guests until they are ready to be released to the wild.

For her devotion those unable to help themselves, Melnick receives this year’s Betty Urquhart Community Service award from UFV.

Melnick’s mission combines her love of animals and her medical training — she is a 1993 graduate of UFV’s Nursing program. On any given day you can find robins, squirrels, opossums, pigeons, ducks, and bunnies (currently 40 in her house) under her care at the shelter.

Melnick rarely takes a day off — “I’m lucky if I can get out to the store!” — and says receiving the award is a welcome boost.

“It’s amazing, so heart-warming, that people would think to honour me. I do get tired, but hearing that news gave me such a wonderful boost of energy!”

But her real rewards come from the animals.

“When you get something that’s unconscious and barely breathing, and you think of a way to warm it up, maybe put it on IV fluids, and then come back later and look and it’s sitting up and perky, that’s the best feeling ever,” she says.

UFV’s Community Service award is named for Betty Urquhart, who was one of the first employees of the university and believed strongly in volunteering and giving back to the community. Betty passed away in 1995, but UFV keeps her memory alive by honouring a person or group exemplifying her commitment to life-long learning and community.