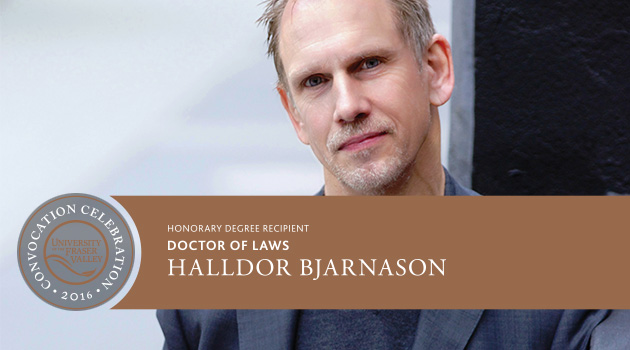 Halldor Bjarnason knows all about overcoming barriers. The cerebral palsy he was born with affects his movement and his speech. It crushed his dream of becoming a firefighter, a profession for which he still cares deeply.

For his tenacity, courage, and leadership in advocacy for people with disabilities, Bjarnason will receive an honorary Doctor of Laws degree from the University of the Fraser Valley at its June 2 morning convocation ceremony at the Abbotsford Centre.

He’s not working for the glory, and was surprised to hear that he’d been chosen for this recognition.

“I’m both delighted and honoured to be receiving this honorary doctorate from the University of the Fraser Valley,” he notes. “It is a pleasure to work within the community — being able to help others is a gift unto itself. However, there’s something special about having others recognize your efforts — it confirms that maybe you’re not as crazy as you sometimes think you are when putting in the long hours.”

As counsel, Bjarnason has appeared in court many times to create, amend, and collapse trusts for persons with disabilities.

Never one to pass up an opportunity for adventure, Bjarnason recently spent three days on the set of the movie Boundaries. He acted alongside silver screen legends like academy award winner Christopher Plummer, Peter Fonda, Christopher Lloyd of Back to the Future fame, and academy award nominee Vera Farmiga.

Besides his professional work, as a single parent, Bjarnason is a leader with his young son Elliot’s Cub Scout pack, and serves on his school’s parent advisory committee in Surrey.

He fuels his lifelong passion for fire and safety issues by volunteering with the City of Vancouver’s Emergency Social Services program and serves as a team and advisory council member of the Vancouver Fire Rescue Service’s Neighbourhood Emergency Assistance Team. He also wrote a book about the history of the Fire Department in Winnipeg, his hometown.

He has also served on the boards of many community organizations including the Neil Squire Foundation, the Planned Lifetime Advocacy Network, the First Baptist Foundation, and Theatre Terrific Society.

Bjarnason’s work, in his profession and in the community, has earned him both a Canadian Bar Association Community Service Award and the Coast Foundation’s Courage to Come Back Award.