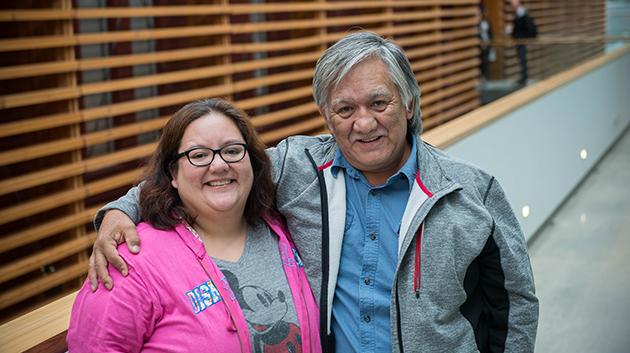 Angi Peters enjoys being in two classes with her father Reid.

When Reid Peters is struggling to understand a difficult concept in his UFV course, he doesn’t have to go far for help.

He can pop over to the house next door at his Seabird Island home and ask his daughter Angi — she’s in the same class.

In fact, Reid and Angi are taking two classes together this semester: Sto:lo Communications and World View with professor Wenona Victor, and Counselling Skills with instructor Nicole Giesbrecht.

At age 67, Reid will graduate from UFV soon. He’s in the final semester of his Social Services diploma with a First Nations option.

Angi has also taken several courses in the Social Services diploma program (First Nations option) since starting at UFV more than 10 years ago. She has taken time off to raise her daughters and to work as the youth engagement coordinator at Seabird Island. Now, as a newly qualified licensed practical nurse, she has returned to UFV. She’s taking additional courses to complete her diploma and is interested in entering the Bachelor of Science in Nursing program.

Their paths aligned this year to take courses together, in part because Angi thought it would be a neat experience to be in the classroom with her father before he graduates this semester.

Members of the Seabird Island First Nation, the father and daughter duo had very different educational backgrounds. Reid spent six years separated from his family at St. Mary’s residential school in Mission, and by age 17 had dropped out and was a logger in the Fraser Valley, leading his own crew.

He was able to raise his family and make a decent living as a logger, but as he got older and sidelined by injury, his thoughts turned to a different sort of work. He was inspired by a desire to help the elders in his community, and returned to school to earn a credential and learn about the human services field.

Reid started at UFV in 2007, taking upgrading courses in order to earn his Grade 12 equivalency (GED) as he approached the age of 60. In 2009, his determination and achievement were recognized by Canada Post, as they chose him as one of their Aboriginal Incentive award winners. After getting his GED, he entered the Social Services diploma program and has been chipping away at it ever since.

His friends tease him a bit about stretching his brain cells at a time of life when many people are starting to take it easy.

“Not too many of my friends have as much education as I have, especially at this age,” he says. “Some of them tease me that at my age I should be forgetting things, not learning new things. But I don’t ever want to stop learning.”

When Angi first arrived at UFV in the early 2000s she was very shy and didn’t know many people.

“It was hard not knowing anybody, but the people in the social services courses made me feel welcome.”

She also connected with Aboriginal Access Services on campus and enjoyed the events and support offered there.

Having taken courses toward the Social Services diploma at UFV and then her practical nursing diploma from another institution, she is seeing the value of the interpersonal skills she learned.

“When I was doing my training in the hospital my social services training really helped me see the patient as a whole person, and I see how beneficial that approach can be in nursing,” she says.

Angi is very proud of her dad and his perseverance as a “very” mature student. She graduated from Agassiz Secondary in 1998 and was determined to continue on to post-secondary studies.

“Dad always instilled in us how important education was.”

He was also influential in inspiring her to return after the age of 30 to finish her UFV diploma.

“I figured out way back that it’s important to finish what you started, so here I am back again to finish my Social Services diploma. My kids think it’s cool that I’m going to school with Grandpa.”

Reid and Angi don’t compete as much as they support one another. It was the same way when Angi took her practical nurse training with her sister through a special program at Seabird Island.

“We don’t so much want to beat each other as to pace each other and make sure we both do well.”

“We’re learning a lot about the role of stories in Sto:lo culture, and hearing some we didn’t know and hadn’t heard before,” says Reid.

“And we enjoy the way she teaches,” adds Angi.

When their Social Services instructor, Nicole Giesbrecht, found out they were father and daughter choosing to learn together, she told them it gave her goosebumps.

It’s not easy being a student when you’re also a working parent. One recent night, Angi was up until 1 am baking cupcakes for the school Halloween party. Throughout her educational journey she has relied on the support of her parents.

She and her dad carpool to class together. Reid makes sure they leave at least an hour before class starts, despite it being a half-hour drive, because he doesn’t want to miss anything. Angi’s mom Tami holds everything together at home.

“My mom has made it possible for me to go to school. She steps in to help take care of my kids so I can work, attend class, and study.”

She’s happy to live next door to her parents.

“I didn’t have the chance to have a lot of interaction with my grandparents growing up, so I am very happy to have my parents so involved in my family’s life.”

Shirley Hardman, UFV’s senior advisor on indigenous affairs, is very happy to see this father-daughter duo working hard at school and preparing to give back to their community.

“One of strengths of indigenizing the academy at UFV is being allowed to witness inter-generational healing of our xwelmexw people,” she says.  “For me, seeing Reid and his daughter Angi on campus reminds me of the hard work that our Elders have had to  do — not only to heal themselves, but to ensure their children embrace a healthy life too.

“I am humbled to see Reid and Angi. It is an honour to see the two of them together working hard in their chosen paths. I think too, that for all students in the classes with the two of them, it is a testimony of reconciliation. Our chiefs and leaders have noted there is a need for improved levels of participation and success for Aboriginal learners in post-secondary education and training in the province. Reid and Angi are breaking through the glass ceiling.”