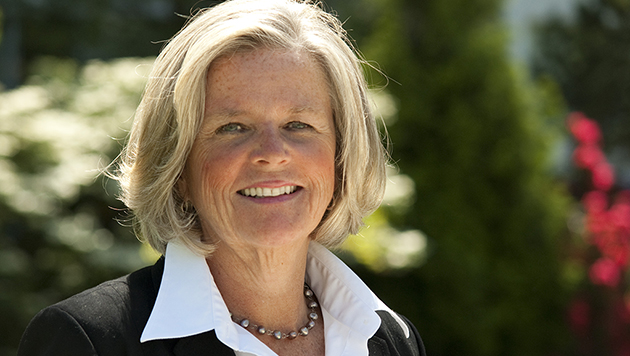 Ginny Dennehy chose to turn grief into action and to live with hope after losing both of her children at a young age. Dennehy, who received an honorary doctorate from the University of the Fraser Valley, returns to campus October 14 to speak as part of the President’s Leadership Lecture Series.

Dennehy will speak at 4 pm in the lecture theatre (Room B101) of the Abbotsford campus. The event is free and the public is welcome to attend.

Ginny and her husband Kerry lost their two children in separate tragedies. First they mourned the loss of their 17-year-old son Kelty in 2001, and then lost their 23-year-old daughter Riley in 2009.

Kelty died by suicide after being overwhelmed by clinical depression and seeing no other way out of his personal darkness. Riley passed away in Thailand after being prescribed too strong a sedative to treat a separated shoulder.

Any parent faced with the loss of all of their children would have a hard time returning from the abyss of grief, but Ginny and Kerry decided to channel their grief and focus on helping others.

“I want people to understand that when something terrible happens to you, you may not have a choice in what happens, but you do have a choice in how you are going to deal with it,” she says. “You have the option of choosing hope and moving on. I want to share how I’ve moved forward.

“Life will never be the same, but you can go on and live a productive life. And one way you can do that is by giving back.”

Out of the tragedy of Kelty’s death came the Kelty Patrick Dennehy Foundation, with a mandate of preventing depression-related suicide in young people. Ginny and Kerry have each taken a turn being president, with Ginny currently holding the post.

Since its inception, the Kelty Foundation has raised nearly $7 million towards care, education, and research projects in the area of youth mental health. Initiatives the foundation has supported include the Kelty Mental Health Resource Centre at B.C. Children’s Hospital, a research chair focused on depression at UBC, the B.C. Crisis Line for youth suicide prevention, and mental health services at Lions Gate Hospital.

UFV President Mark Evered established the President’s Leadership Lecture Series with the intent to bring to UFV inspirational leaders to share their ideas with the Fraser Valley community.

“Dr. Dennehy’s personal story is one of turning tragedy into hope and support for others, and of the ongoing importance of education and research into mental health issues for youth,” said Evered. “We hope members of the community will join us for this unique opportunity to build awareness and engagement on this topic of interest to us all.”

At her lecture, Dennehy plans to share the story of what happened to her children, but also about their early lives.

“I like to portray them like the real people with active lives that they were. Depression can happen to anyone. Kelty was an active athlete and student. I want to take the stigma away because that is the biggest inhibitor to people seeking help for mental illness.”

Dennehy will also be stressing that mental illness affects the whole family and community, not just the person suffering from it.

“I want families and communities to be aware of what signs to watch for, to educate everyone, so that if you know someone who is suffering, you can get help. There are amazing resources available if you know how to seek them out.”

In addition to her lecture, Dennehy will visit with students and faculty from health sciences and social work programs, as well as with UFV counsellors.

“I felt so welcome during my first visit to UFV during your Convocation ceremonies, so I’m very much looking forward to coming back and getting to know the people and programs better,” she noted.

Would you know what to do? UFV Alert test coming soon
UDistrict consultation sessions set for Oct 15