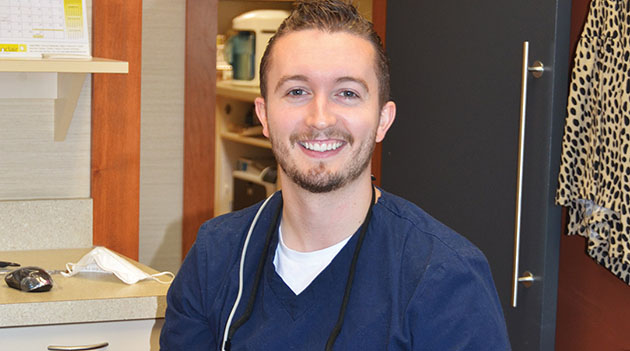 UFV’s 2013 Distinguished Young Alumni award winner — reserved for a high achiever under the age of 35 — has been making an impact at every stage of his education and career. Even before graduating with his Bachelor of Science degree (with a major in biology and minor in kinesiology) in 2006 he was beginning to make his mark.

While at UFV as an undergraduate he made the dean’s list every year, won the award for highest achievement in fourth-year biology, and volunteered in local classrooms.

Following graduation, Evan headed for UBC’s dental program, winning multiple awards including the BC Dental Association’s award for high academic standing, leadership, and community service, and he also won an award for outstanding leadership from the American College of Dentists. He sat on the admissions board to help select future dental students while still a student himself, mentored third-year students while in fourth year, and served as clinic chief for UBC’s community dental clinics.

Between degrees he travelled to 17 countries in one year. When he isn’t globetrotting, Evan is an avid violinist, kayaker, hiker, biker in the summer and skier in the winter. He and wife, Jennifer, live in Kelowna and with their two children.

He’s also actively involved in several volunteer community dental projects around B.C., serving underprivileged communities with no access to dental care. In July, 2013, he led a team of volunteer dentists and hygienists from UBC to provide much needed dental care to the Anaham First Nation community near Williams Lake.

“Helping people and giving to the community is kind of an addiction for me,” he says, crediting Jennifer for providing moral support for his many volunteer projects. “When you’re doing something to help people just because you want to, not for money, they really appreciate it, and the good feeling you get from doing it is infectious.”