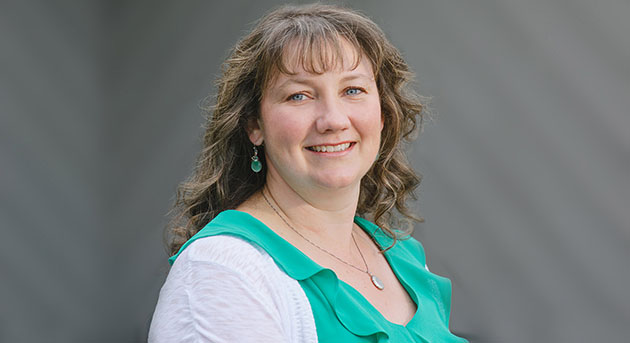 Nurse educator and administrator Tracey Vanderaegen Jones is one of UFV’s Top 40 alumni.

An unsuccessful start to nursing school at a large urban university may have been a blessing in disguise for Tracey.

Tracey, winner of the 2010 Distinguished Alumni award and one of the UFV Top 40 alumni, knew from a young age that she wanted to be a nurse. After high school, she went directly to UBC and now laughs about the experience. “It was my first year away from home and my first year at university. To say I didn’t do well would be an understatement. But I had fun!” she recalls.

After that false start, she seriously considered what she wanted to do with her life. Her goals hadn’t changed, so she got her act together, upgraded her biology, and pleaded with UFV to accept her into its Nursing diploma program, where she fit right in and succeeded immediately.

“At UFV they focus on everybody being successful. If you work hard, you’ll do well.”

She flourished in UFV’s intimate class settings — studying was once again fun. Her classmates made for a small, personable, and lively group. After graduation in 1994, she worked as an on-call, casual nurse at a local hospital, and then signed up to be a nurse on a cruise ship. Through this job she met her husband and moved with him to the U.S.

Tracey was hired by Virginia Mason Hospital in Seattle in 2002 as an operating room nurse. She also continually trained fellow nurses in CPR and it was during this time she was approached to take on the interim educational position in the operating rooms. This led her on a new path to become the perioperative educator (the nurse who trains RNs to work within the surgical suites).

She went on to earn her bachelor’s and master’s degrees from the University of Washington. Her role of orienting new OR nurses is the perfect combination of her dreams of a career in health care and education.

“While I loved working in the operating room, I missed the teaching aspect, so when this opportunity came up, it seemed the best of both worlds.

“Due to my strong foundation at UFV in leadership and advocacy, I have continued to grow in my leadership roles and I have moved from OR educator, to an OR Assistant Nurse Manager, then OR Manager, and am now the current Director in the Post-Anesthesia Care Unit (the pre and post-surgery units).”

Tracey has received a number of awards and community recognition.

“Sometimes I wonder where my career might have taken me if I hadn’t attended UFV. None of this would have happened,” she says.  “UFV gave me my career and UFV sent me travelling around the continent where I met my husband. I believe things happen for a reason, and there was a reason why I ended up at UFV.”