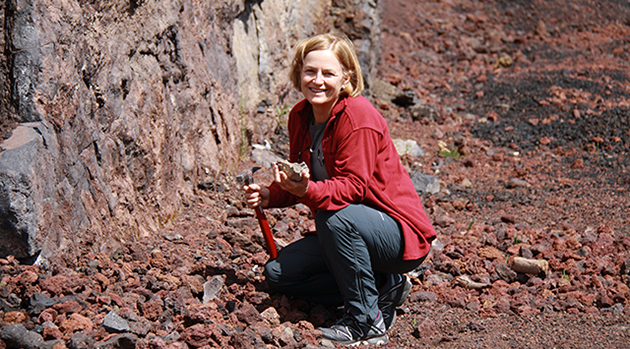 From a child gazing full of wonder at Yellowstone National Park’s gushing geysers to a young woman surviving blasted rock and ash near Mount St. Helens, volcanologist Catherine Hickson has had her adventures.

Now she’s ready to embark on her latest after being awarded an honorary degree from the University of the Fraser Valley. She receives her Doctor of Technology on Thursday, June 11 at 3 pm in the Abbotsford Centre. The public is welcome to attend.

During her undergraduate days at UBC 35 years ago, Hickson stole away for a Victoria Day long weekend adventure. For weeks, seismic activity had been increasing under Mount St. Helens. Steam had broken through its summit crater.

“Everyone was talking about what Mount St. Helens was doing. It was the hottest thing going in geology, so I went down to check it out,” Hickson says.

Her life changed forever when she watched from her campsite as the volcano erupted only 14 km away.

“Most of the people who died were north of us,” she recalls.

“We were lucky in every way.”

Fifty-seven people lost their lives that day. About 250 homes were destroyed, largely by massive debris avalanches triggered by an earthquake measuring 5.1 on the Richter scale. She wrote a book about her experience that day: Mt. St. Helens: Surviving the Stone Wind.

“It was the most incredible and devastating thing I’d ever seen, and it changed my life forever.”

As a young girl in Edmonton, Hickson’s family exposed her to the wonders of the outdoors with trips every summer to places such as Banff, the Grand Canyon, and Yellowstone. She collected a small quarry of rocks from her adventures, finding each one solid with wonder and mystery.

“For some reason I was struck wondering what they were made of and where they came from. In some ways, I guess that’s still true.”

Inspired by her childhood questions and motivated by her experience at Mount. St. Helens, Hickson worked as a volcanologist for Natural Resources Canada’s Geological Survey of Canada in Vancouver, researching how volcanoes formed and evolved by connecting the pieces of puzzles as each was revealed. She ascended to the position of Research Scientist Level 5, the highest attainable within the public service of Canada. She’s the author of more than 100 scientific works, ranging from journal articles to abstracts. Her critical work paved the way for continued research, as well as for other women in her field.

She has mapped the Canadian Cordillera as well as the Cordillera of South America, and has considerable experience in other volcanic regions. One of the few female leaders in the earth science field, Hickson is active in mentoring women and young managers and was one of the founding members of the Scientists and Innovators in the Schools program.

She is also considered a maverick in the world of volcanic mapping, painstakingly exploring and recording areas across the world.

After nearly 25 years in the public sector, Hickson moved into the corporate world, serving as vice-present, exploration, for a geothermal energy company, then president of her own exploration service company Tuya Terra Geo Corp. Her work often involves harnessing electricity from the hot water and steam released by volcanic activity. She is also a director of a junior mining company searching for Lithium deposits.

When she isn’t traversing volcanic ridges, Hickson enjoys time with her husband, Glenn, and mother Jean, an artist who is producing some of her best work at the age of 85.