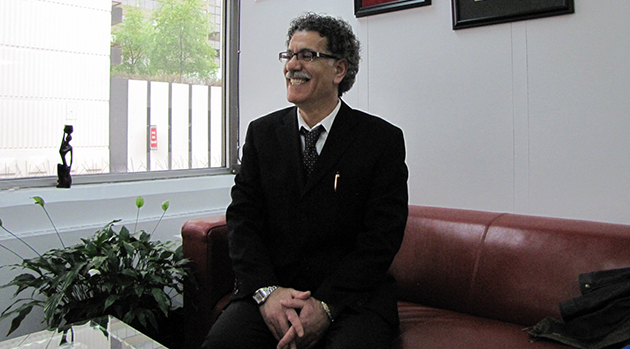 Effectively fighting for the rights of refugees and immigrants from 144 countries takes 12-hours a day, seven days a week. And Shirzad Ahmed wouldn’t have it any other way.

For his dedication to human rights, Shirzad will receive an honorary Doctor of Laws degree from the University of the Fraser Valley at 10 a.m. on Thursday, June 11 during the Convocation ceremony at the Abbotsford Centre. The public is welcome to attend.

He survived Saddam Hussein’s brutal oppression, absorbing all the knowledge and education he could while he and his fellow Kurds were shelled, beaten, and bombarded with chemical weapons. His father scraped together $400 and launched Shirzad on an epic overland trek to find freedom and opportunity. He knocked on the doors of 13 countries before gaining temporary refuge in Italy and then a permanent home in Canada.

And instead of asking for help when he arrived on that cold Saskatoon day more than 30 years ago, Shirzad immediately began helping others.

“For it is not only in the great tragedies of life that our character is tested and strengthened, but also it is in the quietest, most ordinary circumstances that we have the chance to refine our moral character. All that we have, we will one day lose; but our character shall endure in the lives of those we leave behind and in the world that we have to leave to them.” he explains.

“I saw oppression and I saw killing and the one thing I learned in life was don’t forget your roots and don’t shy away from speaking up against injustice. We hear about weapons of mass destruction, but we never talk about weapons of mass instruction. That’s what we need. Education for everyone.”

He worked as a translator and language tutor while dedicating himself to his two favourites: Amnesty International, and the love of his life, Yvette, who was introduced through a mutual friend. Together the young couple made their way west and Shirzad started studying at what was then the University College of the Fraser Valley in 1992.

He made life-long friends almost immediately.

He completed his BA at Simon Fraser University and went on to the University of Calgary for his law degree, but Shirzad’s heart stayed in the Fraser Valley. He quickly rattles off a dozen names when asked which instructor or student had the greatest impact.

“It’s the people that make the University of the Fraser Valley so accomplished,” he says, noting his pride in having served on UCFV’s Board of Governors.

“Shirzad set and broke the mold for student leadership,” Davis noted. “He was a tireless supporter of student success and rights, in general, and of disadvantaged individual students, in particular…. I don’t use the word ‘tireless’ lightly. The man never slept…. And he was inspirational. His strength, determination, passion, intelligence, selflessness, energy, hard work, infectious enthusiasm, and sense of humour transformed the life of many a student who, because of his example, discovered within themselves the motivation and capacity for leadership and commitment to a community and world beyond their particular story,” Davis said.

“I have been proud to call Mr. Ahmed not only a fellow classmate, legal practitioner, and human rights advocate, but a true friend,” he says.

“He prefers to fight the good fight on behalf of people in difficult and compromising situations. He is truly an individual to be admired.”

Patricia Blocksom is a prominent Calgary lawyer continuously inspired by her early and ongoing experiences with Shirzad.

“He is unbelievably compassionate, generous, and understanding to all those he encounters. He is tolerant to differences and is by nature a fair-minded and kind individual,” she says.

“He has not used the privilege of his education to improve his position in life, rather he has used it to advance the rights of those who may be marginalized by their racial, political, or economic backgrounds.”

Shirzad’s door is open to countless refugees fleeing persecution from every corner of the globe. He often assists them for free and even pays their court costs out of his own pocket.

He received the 2008 Distinguished Service award in Pro Bono Legal Service from the Law Society of Alberta and the Canadian Bar Association. In 2009, he was inducted as a member of the Alberta Order of Excellence— to which only 110 Albertans have been named, including just 11 lawyers.

As an extremely highly regarded lawyer, Shirzad could certainly adopt an extravagant lifestyle. Fortunately for the legions needing his help, kicking back and relaxing simply isn’t in Shirzad’s DNA. His idea of a vacation was recently flying to meet with Prime Minister Stephen Harper and high-level ministers to discuss effective measures to combat ISIS.

“Just because I’m comfortable doesn’t mean I should forget about the rest. Whether born here or somewhere else we have a moral obligation to human beings, and it’s not about me coming from another country and forgetting my roots— it’s seeing something that’s happening and speaking up.”

His message to UFV’s class of 2015 is simple: Fight for what’s right for all.

“Grads have been given tools to work with to help others. They should think about the community at large, not just what’s in their own backyard.”

Though he has given so much to so many, Shirzad insists he’s the thankful one.

“I’m grateful and honoured to receive an honorary degree from UFV,” he says.

“It speaks more to the character of the university than about me. For me it’s not about awards. For me this is an achievement of the refugees fleeing persecution. This is for the people who have been there for me: professors, friends, and family. This achievement is actually their achievement, not mine.”

Shirzad was also named one of UFV’s Top 40 Alumni in 2014 and was the Distinguished Alumni award winner in 2011. He is the first UCFV/UFV student to earn an honorary degree.