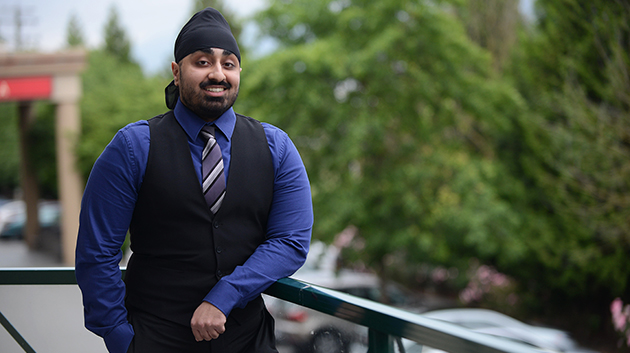 When Sukhvinder Singh Mangat started his Criminal Justice degree program at UFV four years ago, his professor told him studying for his degree would be a transformational experience.

“I was reluctant to believe this. How can simply completing a series of courses result in such a transformative change?” Mangat recalls. “Well, four years later, I can tell you: he was right. My life truly has been changed by my educational experience at UFV. I feel very fortunate, honoured, and humbled to have received several personal accolades. I have enjoyed a level of success beyond my wildest dreams and to an extent unimaginable just four years ago.”

Of course, the person giving the advice knew what he was talking about. Darryl Plecas, a longtime UFV
Crim professor and now the MLA for Abbotsford South, had guided thousands of students through that transformation.

“I’ll never forget the words of Darryl Plecas. He mentioned that after completing a four-year degree, regardless of what program of study you are in, or how well you perform academically, if you survive and cross the finish line, you will leave a profoundly altered person. Not only will you acquire a tremendous amount of knowledge in your area of study, you will also make new friends, foster new relationships, and have many memorable experiences.”

Now, four years later, Mangat is a scholar, a researcher, and an award winner. His impressive grade point average of 4.14 (hovering between and A and A+) earned him the Governor General’s silver medal. The distinction is given to the student graduating from an undergraduate degree program with the highest grade point average (GPA) over their last 30 credits.

Faculty members comment that he is one of the most exceptional students they have encountered. He exhibits a high level of critical thinking and demonstrates a commitment to excellence in all aspects of his work. These skills have contributed to his success at securing research assistant positions on two projects concerning human trafficking and the internet-facilitated exploitation of youth.

His choice of research focus is topical and hits close to home. He kept hearing that his hometown, Abbotsford, was a crime capital of Canada.

“I wondered to myself, is that really the case?”

He decided to look into it for himself, using academic research methods. He conducted a comprehensive analysis of police-reported crime statistics see if Abbotsford was in line with a general decline in crime rates nation-wide and worldwide since the 1990s. And it was. In fact, he found that Abbotsford’s decrease in crime was more profound than any other major jurisdiction in BC.

He says the decline could be partly due to an aging population, technological advances in security, the advent of information-led policing, or to the move to more cybercrime that is less bound to geography.

But his results definitely go against the popular narrative that claims that crime rates are going up.
“People tend to make their judgements based on personal anecdotes that they hear, but as criminologists, we base our research on measurable data.”

Mangat is grateful for the many opportunities available at UFV. His education provided a first career for him, after he graduated from the Pharmacy Technician program. It welcomed him back into the Bachelor of Arts in Criminal Justice program when he wanted to follow his passion. He honed his communication skills by earning a Professional Communications certificate in addition to the BA in Criminology and he became a bona fide researcher by taking advantage of the research opportunities presented to undergraduate students.

“I am proud that I am leaving UFV as a more complete and well-rounded person. These qualities transcend any award or credential. I’m ready to move on to the next phase of my journey.”

He hopes that the next step is a career as a police officer with a municipal police force. Then he’d like to return for his Master of Arts in Criminal Justice once he has some more experience.

“I think my career goals align well with my personality and my values as a person,” he says. “And I hope my fellow graduates can try to live a balanced life — one that focuses on being a good family person and living with integrity.”

One Response to Governor General’s Silver Medal: His prof was right: UFV was life-changing for crim grad Sukh Mangat