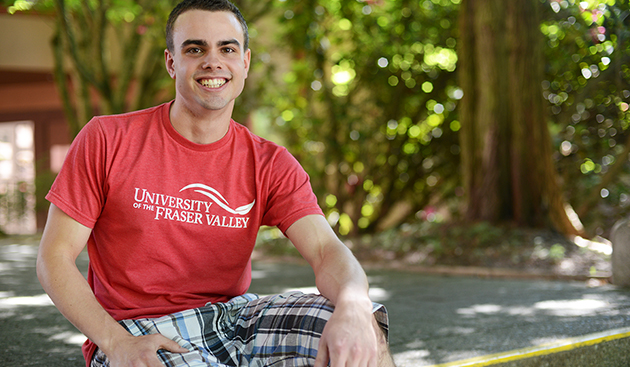 Etienne Dreyer graduated with a BSc at the young age of 19.

His personality isn’t the only thing that’s electric about Etienne Dreyer, who at age 19 recently finished his undergraduate education before many even start.

With a near-perfect 4.10 GPA, Dreyer is the youngest-known person to graduate from the University of the Fraser Valley’s Bachelor of Science program. He first caught the eye of future instructors when his homemade Tesla coil wowed judges at the 2011 Fraser Valley Regional Science Fair , hosted by UFV.

Made partially from old microwave parts, Dreyer’s coil produced hundreds of thousands of volts and streams of electrical discharges when plugged into a standard 120 V wall outlet. He quickly became the de facto keeper of UFV’s Tesla machine after starting university when only 16.

Still, the Abbotsford local insists he was never the smartest student in class.

“I think I’m a slower learner than my classmates because I want to know it in my gut instead of my head. The better I understand something rather than just knowing the answer to it, the more I’m satisfied with what I’m studying.”

Dreyer’s hunger for knowledge was fed by his mother, a nurse who dutifully cruised thrift shops and hardware stores for electronics her son could dissect and examine.

“She wanted us to explore real things, not fantasy. There’s a lot that’s entertaining about the real world around us.”

Being homeschooled alongside five siblings allowed Dreyer to focus on his interests, namely science and math. Having graduated from UFV, he’s already started lab work ahead of entering Simon Fraser University’s Master of Science program with an NSERC Canada graduate scholarship worth $17,500. At SFU he is studying data collected at CERN, the 27 km particle accelerator that helped scientists discover the Higgs boson particle.

It’s a path he proclaimed when barely old enough to drive. After entering UFV through a special admissions process, Etienne promptly walked up to the instructor in his very first class to share his plan of earning a PhD in physics. Now well on his way with a keen interest in high-energy physics, the young man with a Physics major and Math minor says he owes his start, in part, to UFV’s inclusive approach.

“At the undergrad level it’s more important to get fundamentals straight than to have access to state-of-the-art labs,” he says.

“I love the fact that professors are willing to take the extra steps to help students; we’re a small and more community-based university. I couldn’t be where I am now without the physics faculty.”

Ultimately, Dreyer hopes to be a research professor working with grad students, while also teaching undergrads. It’s something he got a head start on while sharing with UFV science students – giving a quantum mechanics lecture, and presenting on Tesla coils and other topics.

“I feel physics can be a black hole for a lot of people. But so much of the fear people have of physics is because no one is making it accessible, no one is bringing it down to the level that everyone can find appreciable.”

In addition to excelling in class, Dreyer represented UFV at the London International Youth Science Forum last year, which attracted more than 400 young scientists from around the globe. He also spent two years as VP of the UFV Physics Students Association and served as student representative on the UFV Faculty of Science Council.

His transcript shows several placements on the Dean’s List and he twice won the Outstanding Achievement Award for mathematics. Desiring to promote science and math led him to judge at the FVRSF, work as a student monitor in the UFV Math Centre, and volunteer at various outreach events organized by the Math department including Math Mania, Math Challengers, and Math Match. Likewise, he enjoyed representing physics at campus events like U-Join, UFV Giving Thanks, and the Annual Faculty of Science Open House.

His excellent work earned him UFV’s 2015 Dean’s Medal for Science.

A well-rounded teen, his other interests include physical activity like hiking, skiing, and cycling as well as right-brain activities like singing, classical guitar, and writing – all the while enjoying time with family and friends. He aspires to follow in the footsteps of other Christian physicists and mathematicians such as Sir Issac Newton, Leonhard Euler, Michael Faraday, James Clerk Maxwell, and Wernher von Braun.

While some might imagine the universe as a series of random conveniences, Dreyer sees intentional equations waiting to be unlocked.

“We are studying the way God made our universe, struggling to grasp his design. That’s what makes science exciting!” he says.

“My faith is what drives me to appreciate the beauty of what I study.”