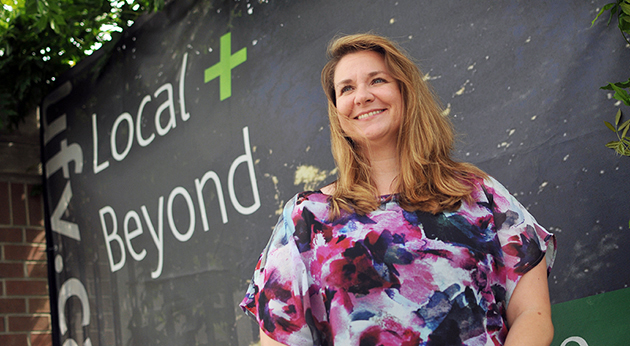 There are few UFV alumni whose lives are as intertwined with their alma mater as Stacey Irwin’s is.

She became the first chair of the UFV Alumni Association when it was incorporated in 2001, and was involved for a year previously when it was an informal organization. She is currently first vice chair of the UFV Board of Governors. She was a key member of the Friends of UFV society that lobbied for university status for what was then UCFV in the mid-2000s.

She is also founding donor and spokesperson for the Carpe Diem alumni giving club at UFV.

“I give to UFV to ensure the next generation of innovators, entrepreneurs, and leaders have the same opportunity that was once mine,” says Irwin. “Together, we can be a great force to shape the future.”

When not working on volunteer commitments, Stacey is manager of web services at Prospera Credit Union, where she is responsible for the strategy and management of the online and mobile services delivery channel. Prior to her many years of work in the financial services industry, she was employed in the newspaper, forestry, and tourism industries. She has held positions in marketing, management, accounting, public relations, project management, and human resources.

She gained valuable work experience while still a student at UFV, having earned a co-op education option to go along with her Bachelor of Business Administration degree. She has since completed her Project Management Professional designation with the Project Management Institute.

Before coming to what was then UCFV, she earned her Business Administration diploma at Okanagan University College, making her one of UFV’s first transfer students when she enrolled in third-year studies at what was then our brand new BBA degree.

In recent years, she has received the prestigious Paul Harris Fellowship Award from Rotary and the Ron Sweeney Community Champion Award for her commitment to community.

“Stacey dedicates her life to volunteerism and community service,” said fellow UFV alumna Susan Francis, who nominated her for the Top 40. “She gives back to UFV and our community in so many ways.”