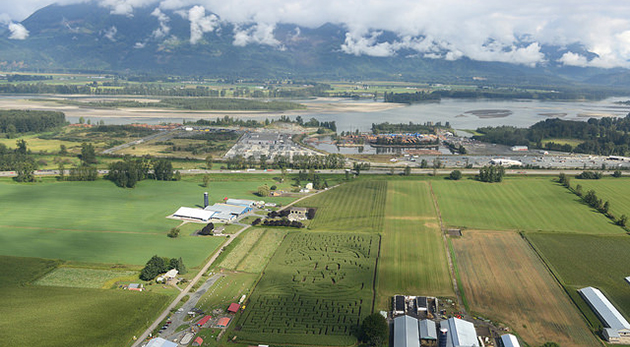 The cover of the latest edition of Skookum features the UFV 40th anniversary logo at the Chilliwack Corn Maze.

The latest edition of Skookum, UFV’s magazine, has hit the mailboxes of alumni and donors and is being distributed throughout our campuses and to our communities.

This edition continues to celebrate our 40th anniversary and highlights the achievements of our Top 40 alumni.

You can see a PDF version of the magazine here, or pick up a copy from University Relations in Abby B310.

“To me, a university should be measured not only by the personal achievements of the graduates, but also by the ways those graduates are enriching our world and improving the lives of others,” said UFV President Mark Evered in his introductory column. “There are now more than 30,000 alumni and many good reasons to be proud of them. These people are our legacy. I know how difficult it was for the Alumni Association to select just 40 for recognition in this year of celebration of our 40th anniversary. But what a remarkable group they are. They are an inspiration to us all.”

“These leaders exemplify a range of exceptional qualities, from career excellence and leadership to acts of selflessness, courage, creativity, and innovation.”

The spring 2015 edition cover features the 40th anniversary corn maze, while donors Dr. Malwinder Dhami and the family of the late Roger Sasaki are highlighted inside. A four-page feature on UFV’s new Chancellor, Dr. Gwen Point, is also part of this edition.

The feedback has been positive.

“Congratulations on UFV’s Top 40 Alumni feature in the latest issue of Skookum. The staff did a great job on the writing and the visuals. It’s quite the gallery of achievers,” said Chilliwack Times publisher Nick Bastaja. “Current students can look to these stories and aspire to achieve as much as these alumni.”

“I just wanted to say how impressed I was with the most recent Skookum issue celebrating 40 years of FVC, UCFV, and UFV by highlighting 40 top alumni,” wrote retired chemistry professor Lillian Martin. “Both the form and the content of the issue were something to behold. The layout, colour schemes, and photos of startling clarity were marvellous.”

“The content was a wonderful to tribute to an educational institution. I was struck by numerous alumni giving credit to UFV for its small class sizes, community involvement, and wonderful supportive and creative faculty.

“But what really stood out was how the alumni had used their education to further their roles as good citizens of a democratic society.”

Skookum is produced by the University Relations department. A team of writers, editors, photographers, and graphic designers collaborate to produce the magazine in partnership with alumni engagement and advancement representatives.

Skookum’s mission is to celebrate the best of UFV. The magazine gets its name from a word from the Chinook jargon, a trade dialect that was used as a cultural bridge between groups of aboriginals and multi-ethnic newcomers to B.C. in the late 19th and early 20th century. Skookum means strong, good, or best, and has entered the Western Canadian vernacular as an adjective of high praise.

The spring 2014 edition of Skookum, also a special 40th anniversary edition, won a platinum award in the 2014 Marcom awards competition.