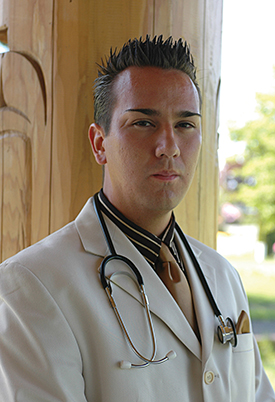 Dr. Peter Eppinga has packed a lot of experience into his first three decades.

Now a resident physician at Alberta Health Services, his fascination with health and the human body really took off when studying kinesiology and biology at UFV. He graduated with his BKin in 2006.

“Kinesiology was great to study because it addresses physiological, mechanical, and psychological mechanisms. While taking this degree the professors had a part in changing my life. They encouraged me to go into medical school. A big Hawaa (that’s thanks in Haida) goes out to UFV professors Allan Arndt and Roger Friesen.”

Peter has both Haida and Dutch heritage, and spent much of his childhood on his home reservation in Old Masset, Haida Gwaii.

“This is where I learned the fundamentals on how to be successful in school. It was my father who bought me a medical book when I was in Grade 3 and my mother always said I was smart because I ate fish! They both said to me that I could become anything I want to in life and to never let anyone’s opinion of me determine what I will become.”

After some rebellious teenage years, Peter recommitted to his Christian faith and began to take school very seriously.

“Instead of picking up the beer bottle I began picking up textbook after textbook until my biceps started to look like Arnold Schwarzenegger! I discovered the brain is like a muscle — the harder you work it and the more you put into it, the stronger it becomes.”

After UFV, Peter attended the University of British Columbia for medical school and then a Master of Health Science degree with a specialty in clinical epidemiology.

He has worked as a consultant on the restructuring of a mobile diabetes clinic and the design of a tele-health surveys and questionnaires. Tele-health entails a doctor assessing patients over the television screen through satellite communication.

He has also participated in research studies at a brain research unit concerning Alzheimer’s disease. Activities included the development and administration of a “brain training” program for patients with mild Alzheimer’s.

“We tested the hypothesis that ‘brain training’ produced higher post- task neuropsychology scores, and assessed associated changes in blood flow in the brain.”

Peter has donated both time and money to bringing better health to the Aboriginal population. This includes working with soup kitchens and doing outreach work in the downtown eastside in Vancouver, and raising money for a youth conference in Haida Gwaii.

Peter has also been involved with the Indigenous Physicians and Association of Canada as student board rep for western Canada.

He has also completed a book titled Your Brain — 3 Pounds of Fat Equals Your Life and Destiny.

He plans to focus his career on family medicine with an emphasis on preventive health measures, and hopes to continue working with aboriginal communities.