UFV criminologist Yvon Dandurand will share insights accumulated from years of working with criminal justice systems in conflict-affected societies at a special lecture on Wed, March 4.

The lecture is part of the Research Lecture Series at UFV. Dandurand will speak at 4 pm in the lecture theatre (B101) on the Abbotsford campus. Admission is free and the public is welcome.
“The future of peace often rests on the success of e 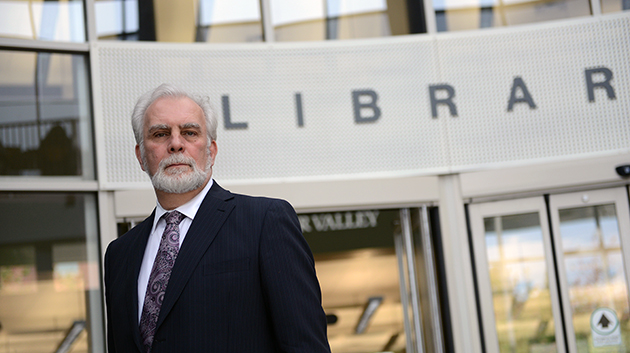 fforts to establish some modicum of security, rebuild national institutions, and restore their public legitimacy and credibility,” says Dandurand. ‘The success of the peace process is also dependent on the ability of existing institutions to deal with the problem of impunity. In a post‐conflict situation, the typically limited capacity of the justice system to address the problem of impunity for major crimes committed before, during, or since the conflict remains a serious issue. It weakens the credibility and legitimacy of justice institutions and may lead to a resurgence of the conflict.”

Recent scholarship on these issues reveals that efforts to promote rule of law and human rights based justice and security reforms in any context often lead to very disappointing results, Dandurand notes.

“Nonetheless, criminology and applied research can play a very important role in the process of institution building in conflict afflicted societies.”

Drawing on his own experience in post-conflict societies, Dandurand will provide some examples of useful interventions, offer reflections on lessons learned over the last decade, and leave you with a message of cautious optimism.

Criminologist Yvon Dandurand is a member of UFV’s School of Criminology and Criminal Justice and a senior associate of the International Centre for Criminal Law Reform and Criminal Justice Policy, a United Nations-affiliated Institute. He joined UFV in 1995. He specializes in comparative criminal law and criminal justice research and was involved in numerous criminal justice reform and capacity building projects in Canada and abroad, including several projects and studies in the areas of organized crime, human trafficking, witness protection, corruption, counter-terrorism, crime prevention, policing, and corrections. He has been involved in policy development in numerous countries as well as in several projects to facilitate and monitor the implementation of international criminal law conventions. He was also involved in institution-building initiatives in post-conflict societies and served as the senior consultant for the United Nations Rule of Law Indicators Project developed for the UN Department of Peacekeeping Operations and the UN Office of the High Commissioner on Human Rights. His research covers a broad spectrum of criminal justice issues and he has authored or co-authored numerous publications on various aspects of criminal justice reform.