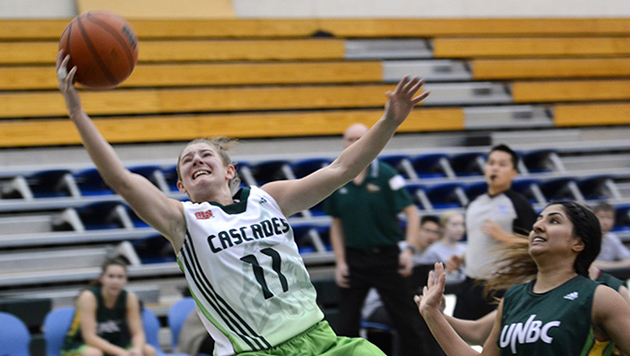 As the University of the Fraser Valley Cascades and the Regina Cougars prepare to duel in the first round of the Canada West playoffs, it’s fascinating to take stock of the striking similarities between the two squads.It’s fair to refer to the Cascades and Cougars as two of the most decorated programs in recent Canada West history. Both have qualified for the last four Canada West Final Fours and made multiple trips to nationals during that span, with CIS medals to show for it. The Cougars won national silver in 2013, while the Cascades were national bronze medalists in 2014.

Their statistical profiles also reveal parallels. Offensively, the Cougars rank fourth in Canada West in points per game (72.3), with the Cascades just a fraction behind them in fifth (72.2). UFV is second in total rebounding (44.7); Regina is third (43.6), though they out-board their opponents by a greater margin (12.0 to 6.2 per game) than the Cascades do. They’re both in the middle of the pack in terms of points allowed per game – UFV is ninth (67.1) and Regina is 10th (68.2).

They even share similar shop-local recruiting philosophies – nine of the 11 players on UFV’s active roster hail from the Fraser Valley, while nine of the Cougars’ 10 players are from Saskatchewan, including eight from the city of Regina.

How they stack up head-to-head will become clear this weekend, with a best-of-three series slated for Friday (6 p.m.), Saturday (6 p.m.) and Sunday (2 p.m., if necessary) at UFV’s Envision Athletic Centre (live webcasts at ufv.canadawest.tv). The winner moves on to face No. 1 seed UBC in the quarter-finals next week.

“We’re playing a team that’s similar to us in a lot of ways,” Cascades head coach Al Tuchscherer acknowledged. “They have effective posts, and they have solid guard play and a premier shooter at the two spot. They’re a really experienced team, as well – their five starters have been in Canada West Final Fours and national championships. Playoff games are nothing new to them.”

Personnel-wise, the Cougars boast terrific size, as four of their five starters stand six feet or taller – centre Jennilea Coppola is 6’3” and averages 8.8 points and 7.6 rebounds per game, while top scorers Katie Polischuk (13.3 points per game), Charlotte Kot (13.2) and Alyssia Kajati (12.6) are all listed at exactly six feet. Point guard Kehlsie Crone averages 9.9 points and 5.1 assists, and shoots a team-best 39.7 per cent from three-point range.

The Cascades’ own strength is in the post – 6’2” senior centre Sarah Wierks led the conference in scoring at 19.2 points per game and also authored the greatest rebounding season in Canada West history. She set single-season records for total rebounds (307) and rebounding average (15.4), and tied the record for double-doubles with 18 in 20 games. The Chilliwack native also established single-game marks for offensive rebounds (12), defensive rebounds (20) and total rebounds (31).

Additionally, UFV gets terrific contributions from 6’1” Katie Brink, who averages 14.8 points per game and scored in double figures in nine straight games to close out the regular season, and 5’11” Shayna Litman, who averaged 9.1 points off the bench.

“I think it starts for us defensively, as always,” Tuchscherer said. “They’re a well-coached team, so we need to defend a lot of different actions against them. We need a solid week of prep here, where we review some of the stuff they’re going to throw at us – we don’t want to be surprised by certain screening actions or sets they’re going to run. We want to be familiar with those things and how we’re going to defend it.”

The Cougars weathered the toughest part of their schedule late in the campaign, with six of their eight losses coming in the last eight games.

The Cascades, meanwhile, have won four of their past five games, highlighted by a 70-57 triumph over the Thompson Rivers WolfPack last Friday. Explorer Division champ TRU was ranked No. 10 in the CIS at the time.

Though there was no Explorer-Pioneer interlock in the regular season, the two teams did clash at Regina’s preseason tournament, with the Cougars prevailing 76-50. The Cascades, still making adjustments after losing six players from the previous season’s CIS bronze medal-winning team, struggled in that contest, losing the rebounding battle 47-25 and shooting just 32.8 per cent from the field compared to 47.8 for Regina.

“I think both teams have evolved to different places, really,” Tuchscherer said. “The good thing for us playing them in the preseason is, we know how dangerous they can be. That game, they really blitzed us and shot the ball well, especially early in the game. Those are lessons that are still quite fresh in our mind.”