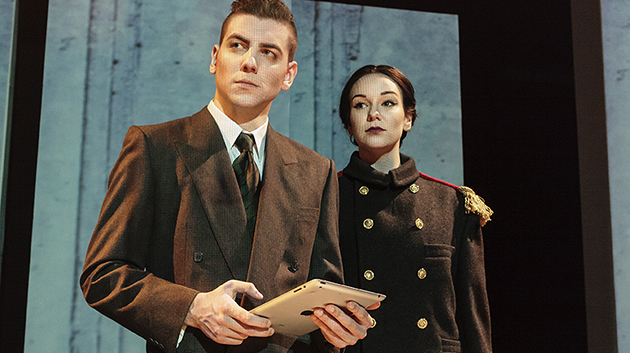 Liam Archer as Mark Anthony and Delaney Bergstrom as Octavius in the UFV Theatre production of Julius Caesar.

“Those who cannot remember the past are condemned to repeat it.”

UFV Theatre’s contemporary adaptation of William Shakespeare’s Julius Caesar, playing March 4 to 15, imagines a future in which history repeats itself. What if the events surrounding the assassination of Julius Caesar were to occur in the digital age? Are there forces already be in motion that could make such an event possible?

“I began by imagining the rise of a powerful military figure in the not-too-distant future,” director Bruce Kirkley explains. “A general whose ability to vanquish global terrorism makes her a political superstar in the eyes of the masses. What if a powerful elite decided to seize upon this enormous popular support to crown Caesar Emperor of the Western World? And what if those who feared Caesar’s growing power chose to take action to defend the democratic republic?”

It’s a fiction, of course, but by casting the events in a more contemporary framework, Kirkley hopes to shed some light on the historical context that led honourable Romans like Marcus Brutus and Caius Cassius to rise up in opposition to Caesar’s power. Giving the play a contemporary setting also invites us to consider the balance between democracy and security. How much political and personal freedom are we prepared to sacrifice in the pursuit of global security? 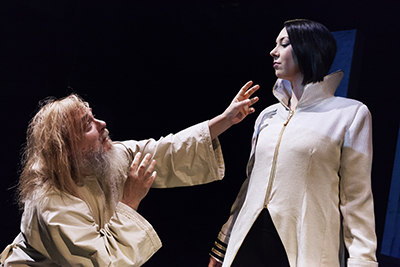 As Julius Caesar (played by Mandy Dyck) rises in power, the ambitious Marc Antony (Liam Archer) seeks to crown her as Emperor. Sensing a threat to the democratic powers of the Senate, Caius Cassius (Dylan Coulter) plots with Marcus Brutus (Geneva Perkins) to assassinate Caesar. Their conspiracy culminates in one of history’s most climactic turning points, as Caesar falls and the world plunges into chaos and war.

Setting the play in the future also allows the possibility to explore the use of digital media in the production design. New UFV faculty member Parjad Sharifi heads up a design team working to combine live media, digital animation and projection montage. “This is an exciting project because we’re exploring the interaction of live digital projection with live performance,” Sharifi points out. “Not too many theatres have done this, so we’re breaking new ground here at UFV. It’s a great learning experience for our students.”

Julius Caesar plays from March 4 to 15 with evening performances at 7:30 pm and Sunday matinees at 2 pm, as well as school matinees at noon.  Information on specific performance dates and ticket prices can be found on the UFV Theatre website at ufv.ca/theatre or by calling 604-795-2814. Tickets can be purchased online, over the phone or in person at the UFV Performance Theatre at 45635 Yale Road, Chilliwack.