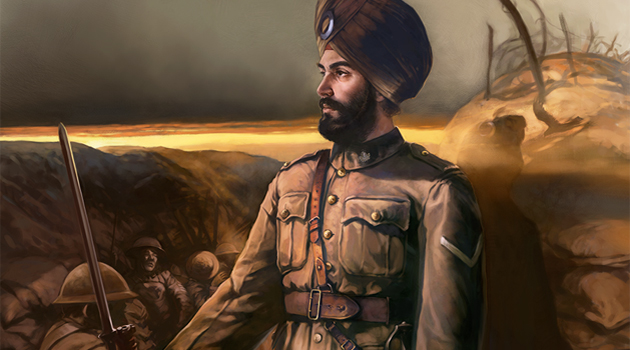 Many Canadians fought in the First World War, and many were killed or injured. But it is often forgotten that those Canadians included ethnic minorities such as Indo-Canadians. The year 2014 marked the beginning of the centennial of World War I (also known as the ‘Great War’), which resulted in an estimated loss of 16 million human lives.

Canadian Sikhs in World War I — The Forgotten Story is a year-long exhibit that opened at the Sikh Heritage Museum at the Gur Sikh Temple National Historic Site in Abbotsford on Sunday, Jan 18. The museum is located at 33094 South Fraser Way.

“We thought that rather than looking at this figure as a whole to come to terms with the massive losses, perhaps it is more effective to look at the role of the individual soldier within a mass of narratives and stories. Perhaps by looking at the individual soldier, we can gain an understanding of the immense sacrifice,” notes Satwinder Bains, Director of the Centre for Indo-Canadian Studies at UFV.

This exhibition makes an attempt to shed light on often overlooked stories of the 10 known Canadian Sikh soldiers who served in WW I.

“The fact that these Sikh soldiers even served for Canada in the Great War begs historic recognition,” says Bains. “The time period of the war, from 1914-1918, was a period of intense racial strife in Canadian history. Indians, along with other ‘coloured’ peoples, were simply not welcome in Canada as participating citizens. The Indians were referred to as the undesirable, the coolie, the dirty hindoo, etc. in the public and institutional domains.”

Incidents such as the 1907 Anti-Asian Riots led by the then-Mayor of Vancouver, the disenfranchisement of Indians in 1907, the ‘continuous journey’ regulation of 1910, or the turning away of the Komagata Maru ship in 1914 are some of the examples that demonstrate the ways in which racism was institutionalized within the Canadian ethos at the time, Bains notes.

“Despite facing such immense and intense discrimination, soldiers such as Bukham Singh, Harnam Singh, Lashman Singh, John Baboo, etc., decided that they still wanted to serve the country that refused to accept them as full citizens and denied them the right to vote,” says Sharanjit Sandhra, Coordinator of the Centre for Indo-Canadian Studies.

Their stories are an important way to gain understanding the nature of the role of Canadian Sikh soldiers in World War I.

Presenting partners and sponsors include UFV, the UFV Centre for Indo-Canadian Studies, the Indus Media Foundation, the Khalsa Diwan Society (Abbotsford), Punjabi Patrika, and the Sikh Heritage Museum of Canada.

UFV launches ontrackTV pilot
What should UFV look like in 2025? Join the conversation