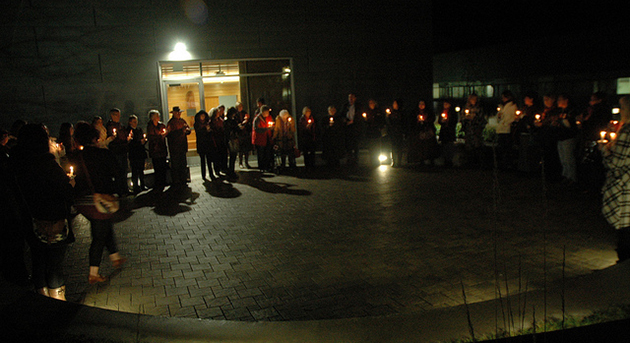 A scene from the candlelight vigil in 2012. This year’s vigil will be during daylight hours, at 12:30 outside the Gathering Place at UFV’s Chilliwack campus.

The University of the Fraser Valley will host a daytime candlelight vigil in honour of the National Day of Remembrance and Action on Violence Against Women in Canada on Friday, Dec 5 at 12:30 pm at its Chilliwack campus at Canada Education Park. The event will be held at the outdoor plaza just outside the Gathering Place on at the east end of Building A (by Givenchy Avenue). The public is invited to attend.

Dec 6 is the National Day of Remembrance and Action on Violence Against Women in Canada. (UFV will be marking it one day early on Dec 5 in order to reach more people on campus.) Established in 1991 by the Parliament of Canada, this day marks the anniversary of the murders in 1989 of 14 young women at l’ecole polytechnique de Montréal. They died because they were women.

As well as commemorating the 14 young women whose lives ended in an act of gender-based violence that shocked the nation, the National Day of Remembrance and Action on Violence Against Women in Canada represents an opportunity for Canadians to reflect on the phenomenon of violence against women in our society. It is an opportunity to consider the women and girls for whom violence is a daily reality, and to remember those who have died as a result of gender-based violence. And finally, it is a day on which communities can consider concrete actions to eliminate all forms of violence against women and girls.

The UFV Faculty and Staff Association will have information tables set up between 11 am and 1 pm in Alumni Hall in Abbotsford and the atrium in Chilliwack on Fri, Dec 5. There will be videos addressing the issue of violence against women running on a continuous loop.

As part of a 16-day campaign of remembrance and activism against gender violence, UFV has also set up information tables at Chilliwack campus at CEP, Trades and Technology at CEP, and at the Abbotsford campus. The tables are in place from Nov 25 to Dec 10.