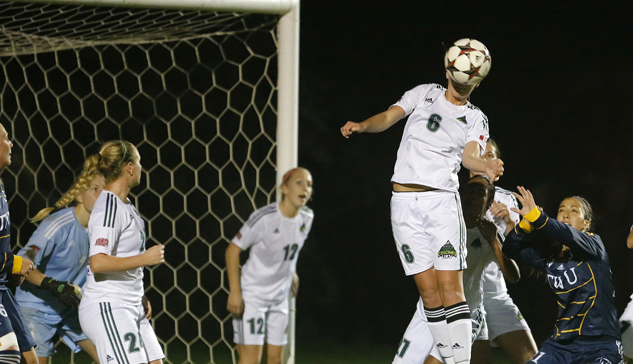 Langley, B.C. – The University of the Fraser Valley women’s soccer team was denied in its bid for a Canada West gold medal on Saturday evening, falling 2-1 to the host Trinity Western Spartans in the conference title game.

Goals by Jennifer Castillo, in the 24th minute, and Jessica King, in the 61st, staked the Spartans to a 2-0 lead on their home pitch, Rogers Field.

The Cascades refused to quit, though, and cut the deficit in half on Shelby Beck’s strike in the 72nd minute. But that was as close as they would come.

Both the Spartans and the Cascades advance to the Canadian Interuniversity Sport (CIS) national championship tournament, to be held Nov. 6-9 in Quebec City.

“They’re a good team, and on this park, they know how to play really well and they use it to their advantage really well,” UFV head coach Rob Giesbrecht said afterward. “They stretched us out at times, I thought, and it felt like we were chasing it a bit too much. They’re so good going forward that when we start diving in and giving them opportunities to get balls into our penalty area, it becomes really tough.

“But I’m really proud of my team – they didn’t quit. A team with less character would have folded their tent after going down 2-0 and a berth to nationals still there safe for us. But we showed a lot of character and a lot of pride as a team by fighting right to the end.”

The Cascades, coming off an emotional 1-0 semifinal win over the Alberta Pandas on Friday, were seeking their second Canada West title – the first came in 2010..

Cascade goalkeeper Kayla Klim with one of her many saves.

They got off to a solid start, as Monika Levarsky sent a cross into the box that Beck just missed getting on the end of.

But the Spartans, the two-time defending CIS champions, grew stronger as the first half wore on and built an 8-0 edge in shots on goal at the break.

One of those – off the foot of Castillo – went in. Off a corner, the Cascades failed to clear the ball, and the fifth-year defender stepped up and put a shot behind Cascades keeper Kayla Klim.

King made it 2-0, finishing a long solo run with a picture-perfect top-corner strike.

The Cascades gained some traction offensively, and were rewarded when Amanda Carruthers whipped a pass into the box that found Beck on a perfectly timed run. She one-timed the ball into the bottom corner.

UFV was unable to find an equalizer, though.

“It’s definitely disappointing, Trinity coming out on top again,” Klim said, alluding to TWU’s two regular season triumphs over UFV. “But we worked hard, and now the focus is next week.

“We’re going all in (at nationals). Our goal is to reach the top, and just keep working hard. We’ve proven ourselves this season, and it’s just time to keep proving ourselves.”