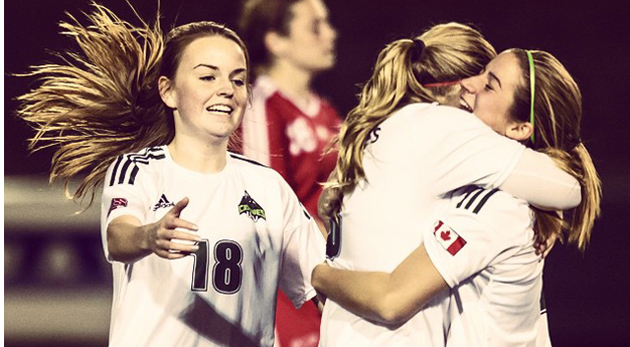 The University of the Fraser Valley women’s soccer team turned in a dominant performance in their opening game at the CIS national championship in Quebec City, but still had to work overtime to get the result they wanted.

Taking on the Memorial Sea-Hawks of St. John’s, Nfld. in the quarter-finals at TELUS-UL Stadium on Thursday, the Cascades spent the vast majority of the game in the Memorial side of the field and out-shot their opponents by a huge margin.

And yet, they found themselves headed to OT after Hannah Rivkin of the Sea-Hawks scored in the 82nd minute to counter Danica Kump’s ice-breaking tally in the 50th.

The Cascades persevered, though, and Carley Radomski scored a sensational go-ahead goal in the first half of OT. UFV hung on for a 2-1 victory, and will face the host Laval Rouge et Or in the semis on Friday (3:30 p.m. Pacific time).

“At this stage of the year, it’s not how you win, it’s if you win,” Cascades head coach Rob Giesbrecht said. “I can’t fault the effort of my players – they worked their tails off, and I’m proud of them for facing the adversity of not being able to finish. We could have had four goals in the first 10 or 15 minutes.

“But you have to stay positive, and we did that.”

The Cascades had several glorious opportunities to open the scoring in the initial minutes of the game. On one sequence, Memorial goalkeeper Hannah Noseworthy got just enough of Monika Levarsky’s rising shot to tip it off the crossbar, but UFV winger Danica Kump was right there for the rebound with no one in front of her. Her shot sailed over the net, though.

Shortly thereafter, Levarsky had a great look from just inside the box, but her drive just cleared the crossbar. Fellow striker Shelby Beck had a crack from the right of the net, but Noseworthy stopped it.

It was scoreless at halftime – UFV’s dominance was thorough, with 16 attempts at goal compared to just five for Memorial, but the finish wasn’t there.

Kump broke through on a broken play. Her initial shot was blocked by a Sea-Hawks defender, but the clearing attempt hit Kump, and she slotted a shot into the bottom right corner that just squeezed under a diving Noseworthy.

Memorial, the Atlantic University Sport (AUS) champs, started gaining a bit of traction as they pushed forward in the waning minutes, and Rivkin took advantage of a UFV defensive error to break in alone and rip a shot into the top corner behind keeper Kayla Klim.

That stunning turn of events set the stage for overtime, where the Canada West silver medalists regained control of the game and were rewarded. On a corner kick, the ball caromed out to Radomski, who had been stationed well outside the box. The sophomore midfielder lofted a high-arcing chip that soared over the mass of humanity in the box and dropped just inside the far post.

Radomski called it the biggest goal of her life.

“I just tried to hit it on frame, because I knew everybody was in the box,” she said. “Worst comes to worst, somebody will get a rebound and just knock it in.”

Giesbrecht’s take on the goal was less modest.

“She’s just such a good player, so technical on the ball, and she has it in her,” he said of Radomski. “The ball came to her, and rather than swinging at it with any kind of panic, she just placed it to the far post. Her level of confidence in her ability and her composure is what separates her from her competitors.”

There was still more OT to be played, and the Cascades found that the best defence was a good offence – they kept possession and continued to press for another goal. Levarsky had another golden chance, dashing in alone from a tight angle on the left, but her shot ran wide.

Klim, lonely at the Cascades’ end of the field for much of the evening, had to come up with a massive save to preserve the victory. With a Memorial attacker swooping in on a partial break down the left wing, she came charging out to make a sprawling stop.

“Mentally, it was pretty tough,” Radomski said, reflecting on her team’s inability to translate chances into goals for much of the night. “But we’ve worked hard on our fitness, so we knew that in the extra 30 minutes, we could keep going after them and that’s what we did.”

“I love the character of my team,” Giesbrecht said. “There’s a lot of emotions involved in a national tournament, where mistakes like that (leading to the Memorial goal) can lead to future mistakes. But we were the better team in overtime. I’m very proud of the girls.”