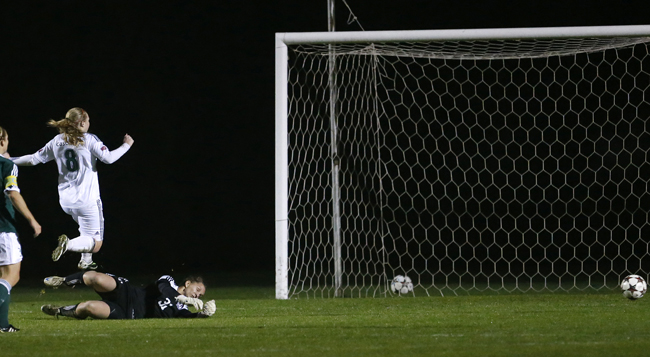 Shelby Beck with the game-winning goal.

Shelby Beck’s goal in the 71st minute on Friday evening simultaneously lifted the University of the Fraser Valley women’s soccer team past the Alberta Pandas into the Canada West final, and into the CIS national championship tournament.

Playing in the Canada West semis on a foggy Halloween night at Trinity Western University’s Rogers Field, Carley Radomski’s slick through ball found Beck in full stride, and she chipped it past onrushing Pandas keeper Kelti Biggs and into the bottom corner of the net.

The Cascades hung on for a 1-0 victory, punching their ticket to CIS nationals for the second time in program history by virtue of their top-two conference finish. Their previous berth came in 2010, and culminated in a bronze medal.

The 2014 CIS tourney runs Nov. 6-9 in Quebec City, but before they fly eastward, the Cascades have one more goal to accomplish in Langley. They face the Final Four host Trinity Western Spartans for the Canada West banner on Saturday at 7 p.m. at Rogers Field.

“Honestly, it was relief – I just wanted to cry with excitement,” Beck said, reflecting on her emotions after the final whistle sounded. “It was so cool just to know that we worked so hard this year and we get to go to nationals. It’s a really cool feeling.”

“I thought the girls played well today,” Cascades head coach Rob Giesbrecht said. “You don’t always get what you deserve, but I think we did deserve the win today, just for our positive play. We kept attacking. Alberta’s a fantastic opponent, so it’s a great victory for us.”

The Cascades, playing before a vocal contingent of fans who made the drive down Highway 1, generated some good looks in the early minutes. Danica Kump and Kara Delwo sent promising crosses into the box, but the Pandas were able to clear the ball away.

Alberta, ranked No. 7 nationally, seemed to steady themselves after 10 minutes had elapsed, but No. 10-ranked UFV was still the more dangerous team in the first half, outshooting Alberta 8-4. They had nothing to show for it, though, and went into halftime tied at zeroes.

The Cascades finally cracked the Pandas’ top-ranked defence in the 71st minute, with Beck supplying the finish. Rookie striker Monika Levarsky got the ball to Radomski, who played Beck through.

“I couldn’t have done it without Dom (Radomski) and Monika,” Beck said. “Our whole team played amazing. It was a perfect through ball, and all I had to do was put it in the corner.”