By Dan Kinvig on November 8, 2014
The Cascades got an outstanding goalkeeping performance from Kayla Klim, who stopped two breakaways and made many other sensational plays to keep the game scoreless well into the second half.

But tournament host Laval eventually broke through – Lea Chastenay-Joseph finally solved Klim in the 74th minute, converting on the Rouge et Or’s third breakaway of the contest. She added a second goal in the 78th minute, and Laval’s third goal of the night in the 83rd was credited as a UFV own goal.

“We ran into a very good team,” UFV head coach Rob Giesbrecht said afterward. “We knew it was going to be tough, but we entered confident.

“We struggled to get a foothold in the game early.”

The Trinity Western Spartans, the Cascades’ local rival from Langley, beat the Ottawa Gee-Gees 3-0 in the earlier semifinal, and UFV was aiming to earn a rematch with the only team that had defeated them this season. The two-time defending national champion Spartans beat the Cascades twice during the regular season, and in the Canada West final last Saturday by a 2-1 score.

But on a cold, windy evening, Laval carried the play in the semi, directing 22 shots at goal compared to just three for the Cascades. Their influence was strongest with the wind at their back in the first half, when they outshot UFV 14-1.

But Klim was up to the task. Early on, Laval midfielder Arielle Roy-Petitclerc was sent in alone down the right side, but the UFV keeper came charging out to cut the angle and got a piece of Roy-Petitclerc’s shot with her right arm.

Shortly thereafter, a Laval attacker corralled a pass at the top of the six-yard box and whirled to fire a shot, but it went directly into Klim’s gloves. Then, she made a fantastic sprawling save to stop a shot labelled for the bottom corner.

Late in the half, UFV started gaining some momentum going forward – rookie striker Monika Levarsky got her head on the end of a cross from Jade Palm, but didn’t get quite enough of it to put it on goal with any sort of velocity. 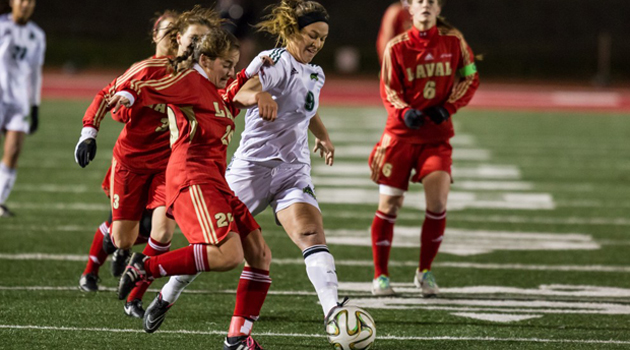 Out of halftime, with the wind at their back, the Cascades had a stretch where they had a bulk of the possession. Their most dangerous chance came when Levarsky sent a cross from the right side into the goalmouth, but two UFV players were unable to get a foot on it.

Laval started regaining traction, and off a corner, put a header off the crossbar.

Not long thereafter, Chastenay-Joseph was sent in on a breakaway and tried to manoeuvre around an onrushing Klim at the top of the box, but the UFV keeper got enough of the ball to snuff the scoring chance.

Chastenay-Joseph made no mistake the next time she was in alone on Klim, though, slotting a shot into the bottom corner to open the scoring. And she struck again four minutes later.

“She’s just an absolute fantastic goalkeeper – she kept us in it,” he said. “I’m proud of my team. We kept fighting. We didn’t quit.

“We just couldn’t get the quality stuff going forward. I think we just needed to get that next level of execution down in our play, but we just fell short.”

Laval moves on to face TWU for the title, while the Cascades clash with Ottawa in the bronze medal game (Sunday, 8:30 a.m. Pacific time, webcast at CIS-SIC.tv).

“It’s a tough situation to lose in the semifinal,” Giesbrecht acknowledged. “But we’re very proud of how we’ve done this year, and we’ll challenge for bronze on Sunday.

“We’ll recover – it’s a good group of kids, and we’re a good team. . . . Hopefully we can do whatever it takes to get that bronze.”