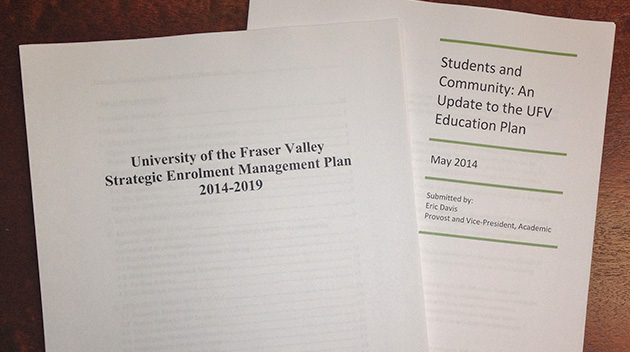 The University of the Fraser Valley recently approved two plans that will guide its actions in the areas of program planning and enrolment management for the next several years.

The 2014 update to the UFV Education Plan 2011–2015 reflects the changing context in which the university operates, including new expectations from the provincial government and the local communities that UFV serves.

The new UFV Strategic Enrolment Management Plan 2014-2019 identifies enrolment goals that are aligned with the university’s strategic goals and resources, and seeks ways to meet those goals through the integration of academic processes, student services, curriculum planning, and market analysis.

2014 update to the UFV Education Plan 2011–2015
The 2014 update to UFV’s education plan acknowledges the new expectations in the provincial government’s Skills for Jobs Blueprint: Re-engineering Education and Training, which will see provincial funding for post-secondary education increasingly tied to labour market information and workplace targets, particularly to “high-demand” occupations.

While some see these changes as a threat to the traditional liberal arts and the favouring of hands-on trades training over more theoretical studies, UFV Provost and Vice President Academic Eric Davis said that there is no inherent dichotomy — or divide — between the liberal arts and an applied education. 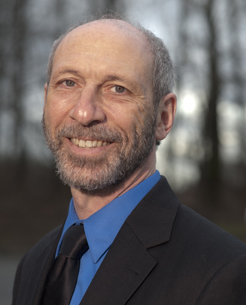 “The course UFV has been on and continues to forge ahead with is one that deliberately integrates liberal, professional, and applied studies, including trades,” he said. “We will be able to identify sufficient current and new programming that meets the Blueprint’s requirement of labour market relevance.”

Davis said that surveys of employers show that the skills and qualities they seek are the same ones that are provided by a liberal arts education.

“Employers tell us that they want graduates with strong speaking, writing, numeracy, problem-solving, critical thinking and reasoning skills, as well as resiliency, adaptability to change, and the more applied skills,” he said. “The key is integrating the two focuses, so that potential employees are both well rounded and skilled in specific areas. Our UFV programs meet that challenge.”

UFV is mandated by the government to be a regional, teaching-focused university. Its strategic goals include providing the best undergraduate education in Canada, and being a leader of social, cultural, economic, and environmentally responsible development in the Fraser Valley.

“When we are planning our programming, we need to make sure we tap into what the employers of the Fraser Valley need as per our regional mandate and strategic goals. This may differ from the resource-sector jobs prevalent in other areas of the province,” noted Davis. “Our communities are telling us that agriculture, health care, and the creative sector are three important areas for growth.”

To that end, three broad areas for focusing program development at UFV have been identified: health and wellness, agriculture and the environment, and digital media technologies.

“All three of these areas tie in well with both our region and the changing economy,” noted Davis. “Agriculture and the environment as a potential growth area is a logical result of our location in the heart of the most productive farmland in North America and ties in well with our new Agriculture Centre of Excellence.

“The most pressing and expensive policy issue is health care. If we develop more programs in the area of health and wellness it will result in a healthier population and make health care spending less of a budgetary burden, freeing up resources for other spending priorities. And the future is undeniably digital. Students today come to us as digital natives — young people who have grown up taking digital technology for granted — but they will need to further develop their digital expertise in order to succeed in the employment market.”

The common threads in the areas identified for program growth are that they are cross-disciplinary.

“A cross-disciplinary approach to programming draws on areas of expertise that we already possess, is attractive to students, and fits with the needs of the Fraser Valley economy,” Davis noted. “For instance, health and wellness programming will draw on the experience of faculty in sociology, psychology, kinesiology, and nursing.”

UFV is also working on ways to allow trades students wanting to pursue a degree to bring their trades learning to the program and receive recognition of it (as they already can for the Bachelor of Global Studies degree), and to allow students from other disciplines to receive some trades training.

Since starting to develop its own bachelor’s degree programs in the 1990s and gaining university status in 2008, UFV has taken a deliberate approach to program development that blends academic and applied programming, Davis said. It’s the approach of the future, he contends.

The new Strategic Enrolment Management Plan 2014-2019 identifies nine enrolment goals that are aligned with the university’s strategic goals, resources and education plan, and seeks ways to meet those goals through the integration of academic processes, student services, curriculum planning, and market analysis.

The plan is consistent with the provincial government’s BC Jobs Plan and the BC Skills for Jobs Blueprint, and with the University’s mandate to provide the best learning experience for students while serving the needs of the Fraser Valley. 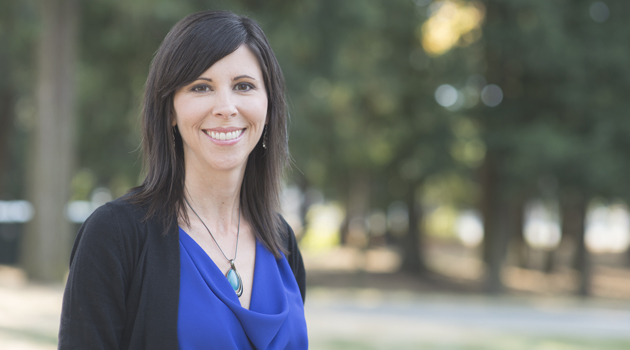 “Strategically managing our enrolments in the manner directed by this plan will greatly facilitate the achievement of all of these planning objectives and ensure that UFV graduates have both the citizenship abilities and employable and/or entrepreneurial skills needed by our society and economy,” noted Jody Gordon, UFV Vice President, Students, who led the development of the SEM plan.

While strategic enrolment management planning is often thought of as a method for increasing growth at a university, in UFV’s case the plan assumes no or very little growth in total student numbers for the next five years. The university already “overproduces” more full-time equivalent student spaces (FTEs) to the level of 103 percent, or three percent more than it is funded for.

What the plan does seek to do is improve overall student success by:

Of the nine goals, a key one is to better support students who have previously been on program “paths” awaiting formal entry into a program through placing them into a Qualifying Studies program. This will include admission requirements, continuance requirements, and formal monitoring and support.

“We are an access university in that we have an open admission policy, but we want to ensure student success as well as access,” noted Gordon. “The Qualifying Studies program will ensure that students take the courses they need to meet program admission requirements and use the supports in order to be successful, such as academic advising and academic preparation courses.”

Gordon notes that most of the goals in the Strategic Enrolment Management plan will require the cooperation and combined efforts of both teaching and student-support areas of the university.

“Meeting these goals will be a campus-wide effort. For example, in the area of improving retention, Student Services might implement intrusive advising through an early-alert system, while academic departments may reorganize their program in first year to help more students successfully navigate course prerequisites, or perhaps embed into the classroom a learning group of student tutors as support for difficult gateway courses.”

Much research went into the Strategic Enrolment Plan, and Gordon says UFV now has a much better understanding of such areas as retention.

“By really drilling down and analyzing the fine data, we learned a lot about the flow through of our students — who we keep, who we don’t, who graduates, and who doesn’t. We will use that knowledge to pursue the nine goals we have identified and direct our tactics and strategies toward meeting those goals.”

She gives credit to many areas of UFV for working together to develop the SEM plan.

“I am very proud that when the Board of Governors asked us to develop this plan, the academic leadership (from the Provost’s office right through all the academic faculties), the Institutional Research Office, the student support areas, and many other departments worked together to realize it. Everyone was focused on student success. It became a real rallying point for who we are as a university and where we are headed.”

Gordon, along with Provost Eric Davis, will be convening an oversight committee to steer and guide the strategies and tactics of the SEM plan over the next five years.